Shreyas Iyer: If you are a great talent, then you need some time

Having missed out on a World Cup 2019 berth despite some good domestic performances, 24-year-old Shreyas Iyer is now keenly looking forward to the limited overs

Having missed out on a World Cup 2019 berth despite some good domestic performances, 24-year-old Shreyas Iyer is now keenly looking forward to the limited overs series in West Indies, which he is part of.

Iyer wants to cement his place in the team, and admits that coming in and out of the team constantly does not help the player's confidence or his belief in his own talent.

"If you are really a good talent, then you need a certain amount of chances to prove yourself and get acclimatised to the conditions," Iyer said in a PTI report. 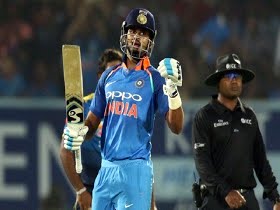 "If you keep coming in and going out, it doesn't really set a good pattern for one's self and you start disbelieving yourself. If you are a great talent, then you need some time," Iyer went on to explain in the same report.

The youngster, who led Delhi Capitals to the playoffs in IPL this year, has only only featured in six ODIs and as many T20s so far. He does state that non-selection despite good domestic showing does hurt, but he just wants to keep performing as selection is not in his hands.

"Yes, you tend to lose patience but selection is not in your hands. All you can do is perform, perform and perform, and that's what I enjoy doing," Iyer said about being in and out of the Indian team.

"You have to keep performing and keep showing people that you are capable of playing at the higher league. Once you get that sniff, you never look back," he added in the PTI report.

Iyer did not find a place in the World Cup 2019 squad despite averaging over 50 in first-class games and nearly 43 in List A matches. He admits the snub was tough but adds, "Yes, there was a lot of buzz about me before the World Cup selection because I was consistent and aware about the hard work and smart work that I had put in. It will definitely reap benefits and help me in future when I play for India."