The last league match of the Champions League T20 2012 ended in a damp squib between Delhi Daredevils and Titans at Centurion.

The last league match of the Champions League T20 2012 ended in a damp squib between Delhi Daredevils and Titans at Centurion. Both the teams are into the Semi Finals though so the rain didn’t matter a lot for either of the teams. It was a thunderstorm that ruined the match after the toss was held. Just about an hour and 20 minutes from the scheduled start time, the match was abandoned.

The Semi Finals line-up is Delhi Daredevils Vs Lions at Durban on October 25th and Sydney Sixers Vs Titans at Centurion on October 26th. 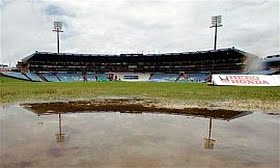 Toss and Teams: Delhi Daredevils led by Ross Taylor tonight have been asked to bat first after losing the toss in their inconsequential match against Titans at Centurion. Both the teams are of course into the Semi Finals. The Daredevils have made one change with Skipper Mahela Jayawardene making way for David Warner. Titans have made two changes with Eden Links and Heino Kuhn getting replaced with Mangaliso Mosehle and Paul Harris.

The weather though for the match isn’t promising with a chance of scattered thunderstorms.