Super Overs continued to haunt New Zealand as they went down to India in the third T20I at Hamilton to concede the five-match series. Needing 10 to win off the last two balls in the Super

Super Overs continued to haunt New Zealand as they went down to India in the third T20I at Hamilton to concede the five-match series. Needing 10 to win off the last two balls in the Super Over, Rohit Sharma smashed Tim Southee for consecutive sixes to seal a famous win for India. For the Kiwis, this was the third occasion in recent times that they have faltered in the Super Over -- most famously in the World Cup 2019 final against England followed by the Auckland T20I last November.

India’s Super Over triumph quite literally saw them snatch victory from the jaws of defeat. The hosts only needed two runs to win from four balls in the last over courtesy a majestic inning of 95 from 48 balls from skipper Kane Williamson. However, Mohammed Shami had him caught behind in the last over. Tim Seifert failed to get bat to the ball to consecutive deliveries, and only managed a bye after which Ross Taylor dragged the last delivery on to the stumps, and the match headed into the dreaded Super Over for New Zealand. 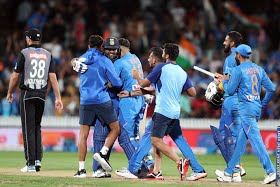 Williamson would be gutted with the result as he played a sensational hand to take the Kiwis to the doorsteps of victory. The Kiwi captain was particularly severe on Jasprit Bumrah, who had a rare off day. India’s number one bowler was carted all over the park and finished with figures of 0 for 45. Williamson also took on Ravindra Jadeja and Shami, but the latter eventually had the last laugh.

Chasing 180, New Zealand again got off to an impressive start courtesy Martin Guptill’s 31 from 21 balls. However, his opening partner Colin Munro struggled at the other end, and his agony ended when he was stumped off Jadeja’s bowling for 14 from 16. Colin de Grandhomme’s poor series continued as he managed only five in 12 balls. It was left to Williamson to lift the side, and he did so incredibly.

Earlier, batting first, New Zealand restricted India to 179 for 5 on a slow pitch. Rohit roared back to form with 65 from 40 deliveries. However, India struggled for momentum after his dismissal as skipper Virat Kohli made a slow 38 from 27 before perishing. The decision to promote Shivam Dube to number three did not work as the all-rounder fell for 3. A six each from Manish Pandey and Jadeja at the death lifted India to 179.

After the game, Kohli admitted that Williamson’s brilliance almost took the game away from them. “I thought we were gone at one stage. I told our coach that they probably deserved to finish the game off with the way Kane batted and the way he led from the front. We got a wicket at a crucial stage. Shami again showed his experience and put a couple of balls outside the off-stump. On the last ball, we had a discussion and we came to the conclusion that we had to hit the stumps because otherwise there is a single anyway and we are gonna lose the game. Shami went for it, got the wicket and the game turned on its head,” the captain explained.

The fourth match of the series will be played at Wellington on Friday, and the final match in Mount Maunganui on Sunday.