When Australia had cleaned up Sri Lanka for 117 on the opening day of the first Test at Pallekele, little did they know that they would end up being whitewashed 3-0. But, that is how the series ended for them

When Australia had cleaned up Sri Lanka for 117 on the opening day of the first Test at Pallekele, little did they know that they would end up being whitewashed 3-0. But, that is how the series ended for them. Sri Lanka fought back to claim the first Test with ease, and never looked back after that. Australia, on the other hand, could never recover after Kusal Mendis' brilliance turned around the first Test. That innings stunned Australia, and they could never really recover from that setback. The rest of the series was all about Sri Lanka's dominance but for a couple sessions where the Aussies actually managed to compete.

The biggest problem for Australia in the series which let them down was their inept batting. There was a lot of inexperience in the batting, especially under the conditions, and it clearly made a big difference. At the top, Joe Burns was as poor as Dimuth Karunaratne and Kaushal Silva (the latter until the last Test). He just could not make any impact on the series, falling cheaply during every visit to the crease. Adam Voges, who arrived in Sri Lanka, with a Bradmanesque average also found the going difficult. There were hopes from Mitchell Marsh, but he also proved raw. Moises Henriques was brought in for the last Test, but was inept.

Another big issue for the Aussies was the fact even the experienced batsmen, on whom the team depended so much, let the side down. David Warner, at the top of the order, was critical to the team's cause. He tried to be both defensive and aggressive. The former tactic did not work, and by the time he adopted the latter, the series was done. Even then, he did not taste exceptional success when going after the bowling. Galle saw him get a couple of 40s while he got a blazing half-century on the last day at Colombo. But, Australia were definitely expecting a lot more from the man known for scoring big tons.

Apart from Warner, skipper Steven Smith was the other big disappointment of the series. Yes, he did get a hundred in the final Test and had a couple of other good scores to show. But, being the most experienced batsman in the side, Australia were expecting a lot more from him. Smith had to have an exceptional series if Australia wanted to keep out the threat of Rangana Herath and co. But, it wasn't to be the case. While Smith himself kept advocating playing straight to combat spin, he himself was out more than once trying to cut against the turn. So much for following what you preach. As captain, Smith was a definite disappointment. 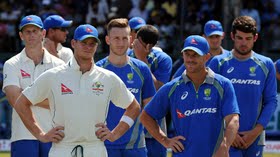 Australia's bowlers did reasonably better in comparison. Mitchell Starc stood out, making an impression even on pitches not conducive to him. On an otherwise disastrous tour, the left-arm seamer stood out from the rest. Josh Hazelwood got a few wickets here are there, but overall he could not make much of an impression. It was the kind of series where they missed someone like a Peter Siddle, who could keep things tight at one end. In the spin department, Nathan Lyon did a decent job, but was nowhere in the mould of his Lankan counterparts. That again made a big difference.