Rain has the last laugh in Second T20I at Manchester

The second T20I at Manchester was abandoned after heavy rain had the last laugh. There could have been a result but rain had lashed out with just five more balls to go for the completion of the 5th over of the English innings.

The second T20I at Manchester was abandoned after heavy rain had the last laugh. There could have been a result but rain had lashed out with just five more balls to go for the completion of the 5th over of the English innings. The hosts needing 78 runs to win 9 overs were struggling at 29 for 2 in 4.1 overs before the final rain interruption. South Africa leads the 3-match series 1-0 with one more game to be played on the 12th at Birmingham.

South Africa Innings: The match finally got underway at Manchester but was cut short to a 9-over contest in which South Africa posted a healthy total of 77 for 5. Hashim Amla kept his cool to score an attacking 47* from 30 balls with 7 fours. The rest of the batsmen struggled to get going as the pitch livened up after the rain. Steven Finn was tough with his pace and bounce as he took 2 for 17 in 2 overs. 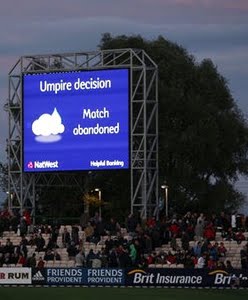 Update at 17:30 GMT: Rain has delayed the start of the 2nd T20I at Manchester. The match was just about to begin when the drizzle got bigger to force the Umpires to take the players off the park. The weather forecast is for heavy showers for tonight, so we will be lucky to see any action at Old Trafford!

Toss and Teams: England have won the toss and asked South Africa to bat first in the Second T20I at Old Trafford in Manchester. This is a must-win game for England having lost the first T20I of the 3-match series. The hosts have made one change with Luke Wright replacing Ravi Bopara. South Africa have made two changes with Hashim Amla and Morne Morkel replacing Faf du Plessis and Lonwabo Tsotsobe.