Eng Vs Aus 5th ODI: Everything to play for at Old Trafford

At one stage during the series, England found themselves in a very tough position. They lost the first two one-day matches, and found themselves in a position where they needed to win the next three games to come back and clinch the series. They are more than halfway there now, having won the last two matches to square the series. They also have the momentum going into the final ODI at Old Trafford. Having already won the Ashes, England would be keen to claim the one-dayers as well. It would be a perfect end to a great series for them. For the Aussies, a one-day series victory would be a good consolation.

The biggest plus for England from the current series has been the splendid batting effort of their skipper Eoin Morgan. The left-hander has batted exceedingly well in the series, and has been by far the team's most consistent batsman. At Leeds as well, it was his innings that made the big difference as far as the end result was concerned. Morgan came in at a time when England were in trouble chasing a challenging score. They needed someone to play a match-turning knock. What has been most impressive about Morgan's performance has been the rate at which he has scored, allowing the others to play around him. 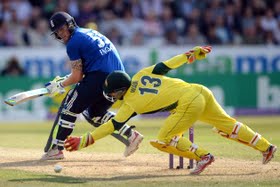 In the previous match, England got good performances from a number of batsmen, and the supporting acts helped the hosts overcome a tough score with ease in the end. James Taylor has continued his consistent run. He now has one hundred and three 40s in the series, very acceptable figures. The fact that he is batting at number three makes his performance even more important. At the top, Jason Ray has also given the team good starts even though he has not always carried on to make bigger scores. The biggest worry for the hosts undoubtedly will be the form of Alex Hales. He hasn't made a single score of note, and England might not want to risk a new combination in a do-or-die game.

In contrast, Australia have failed to flourish in the last two matches, in spite of the fact that they were in command, being 2-0 up in the series. Bowling will be a worry for the Aussies since they have conceded nearly 300 in the last two matches. Australia's bowling was not up to the mark at Leeds as well. James Pattinson was really poor conceding way too many runs during his bowling stint. Pat Cummins was the only bowler who made an impression in the game with his four wickets. John Hastings was expensive as well while Mitchell Marsh and Glenn Maxwell again couldn't make much of an impression.

Australia's batting has flourished in the series, but for the one match -- the third game of the series. They would like to continue with the good work with the bat, and hope their bowling measures up at Old Trafford. Like Morgan, his counterpart Steven Smith also has been in excellent form. Maxwell roared back to form with a splendid knock in the last game. George Bailey also came up with a very smart knock while Matthew Wade continued his excellent form with the bat. Better performances from the openers would help though as would improved an effort from their bowlers.