The 2016 ICC World Twenty20 will be the sixth ICC World T20 tournament and is scheduled to be held in India from 11 March to 3 April. Sri Lanka are the defending champions.

India has been confirmed as host for the T20 Cricket World Cup 2016, scheduled to be start from March 11 to April 3 2016, the ICC announced after ratifying its decision in the Board meeting in Dubai on Thursday.

Holding its first meeting of the year at the ICC headquarters, which was chaired by Narayanaswami Srinivasan and presided by Mustafa Kamal in the presence of all the full-member and associate representatives, the board took some major decisions issued quite a few directives to the cricket world. 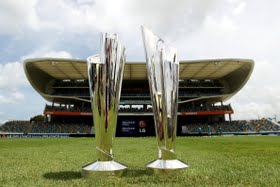 The apex cricket body approved the dates for its main events through to 2019, following its Board meeting on Wednesday. Though the tournaments were awarded to the countries in 2013, the dates were approved during this two-day meeting.

The board also approved the dates for the 2017 Champions Trophy in England which will be held between June 1-19. England will also host the 50-over World Cup in 2019 from May 30 to June 15.