Ireland defeated Zimbabwe by a comprehensive margin of 54 runs in the Warm Up match of the ICC World T20 2012 at Moors Sports Club Ground in Colombo.

Ireland defeated Zimbabwe by a comprehensive margin of 54 runs in the Warm Up match of the ICC World T20 2012 at Moors Sports Club Ground in Colombo.

Asked to bat first after losing the toss, Ireland piled up an impressive 181 for 5 in the allotted 20 overs. Wicket Keeper batsman Niall O’Brien top scored with 62 from 49 balls with 4 fours and 2 sixes. His brother Kevin O’Brien came up with an unbeaten cameo of 30 from 14 balls 2 fours and 2 sixes. For the Zimbabweans, medium pacer Chris Mpofu took 3 for 39 in 4 overs. 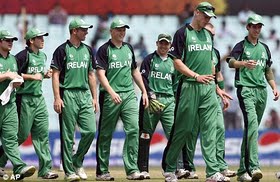 Zimbabwe in the run chase were going along nicely at 74 for 2 in the 9th over before a middle order collapse wrecked them apart. The Zims were reduced out of nowhere to 83 for 8 by the 14th over. In the end, they finished at 127 for 8 to come as a distant second. Opener Hamilton Masakadza was the top scorer with 44 from 27 balls with 5 fours and 2 sixes.