• Full Scorecard
Aaron Finch: "I thought we had a really good start, through that middle part wuth Yuvi and Pandey, but quick wickets didn't help, if we had 20 runs more we could have squeezed them a bit. We got three days off now before we play KKR in Ranchi."

Rohit Sharma: "All credit goes to the boys, whatever changes I have made on the field, they are responding very well, it is really working out very well for me. We should carry the same momentum."

Man of the Match Mitchell Johnson: "definitely enjoying myself, we haven't bowled first in a while, it was nice to get out there and bowl first. You had to bowl a little bit shorter on this slow wicket, I think being a fast bowler you have to try being intimidating. Being a fast bowler is all about mixing it up." 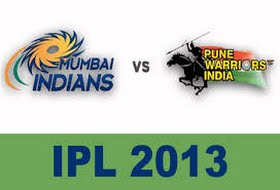