RR Vs RCB: Rajasthan’s decision to promote Samson was a bold one

Playing at home, whatever the Rajasthan Royals try out seems to work wonderfully well. On Monday, at the Sawai Man Singh Stadium in Jaipur, they decided to give a little-known youngster Sanju Samson a chance to bat higher in the order..

Playing at home, whatever the Rajasthan Royals try out seems to work wonderfully well. On Monday, at the Sawai Man Singh Stadium in Jaipur, they decided to give a little-known youngster Sanju Samson a chance to bat higher in the order, even above Shane Watson and Brad Hodge, and that too while chasing a big total, against the Royal Challengers Bangalore. It was a brave decision that could have backfired. However, Samson made full use of the opportunity that came his way, to lead Rajasthan to victory and keep their unbeaten home record intact.

Samson’s innings was highly impressive considering that he was under extreme pressure following the early dismissal of Ajinkya Rahane and with skipper Rahul Dravid also falling after getting a start. The need of the hour for Rajasthan was to string together a crucial partnership, and that too while keeping the required run rate at manageable proportions. This is what Samson did wonderfully well during his knock. The most striking aspect of his knock was that he hardly played a slog shot during his stay at the crease. Most of his high-scoring shots were proper cricketing strokes and yet he managed to maintain a run-rate of over 150. 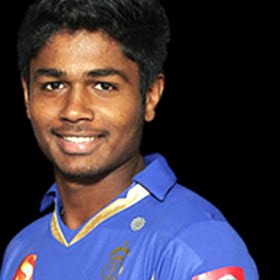 While Samson was very good, it was a proper team effort by Rajasthan with the bat that saw them overcome Bangalore’s challenge. Samson was supported ably by Shane Watson. The Aussie all-rounder, who has been Rajasthan’s star performer with the bat in the earlier few matches, had no qualms playing second fiddle to Samson in this game. He was happy rotating the strike over and handing it to his partner, and only opened up once Samson fell. Brad Hodge also came up with an impressive cameo while Stuart Binny’s calm boundary under pressure took them to past the victory line.

Bangalore once against found themselves in trouble with the bat after Chris Gayle’s magnificence was short lived. The West Indian left-hander once again played some smashing strokes to get the innings off to a flyer. However, just when he looked set to come up with yet another magical innings, he fell to an innocuous delivery from Watson. It was a terrific breakthrough, which expectedly put Rajasthan on top, as Virat Kohli, AB de Villiers and Moises Henriques failed to raise the tempo. If Bangalore managed to get to a challenging score, it was because Vinay Kumar slammed some massive sixes towards the end.

Rajasthan had a mixed run with the ball, with Ajit Chandila and James Faulkner going for plenty even as Watson picked up the big scalps while keeping the runs down to a premium. Bangalore also did not perform exceedingly well with the ball. Ravi Rampaul was competent as ever with a couple of wickets, but Vinay Kumar, Murali Kartik and Jaydev Unadkat went for plenty as Rajasthan gained the upper hand.

Turning point of the game: With the match going down to the wire, Binny’s last over four off Vinay Kumar sealed the deal.