PAK vs ENG: Misbah hit century on a hard fought day for the bowlers

Pakistan’s skipper Misbah-ul-Haq scored a magnificent century and held the Pakistan’s first inning together on the first day of the second Test at Dubai.

Pakistan’s skipper Misbah-ul-Haq scored a magnificent century and held the Pakistan’s first inning together on the first day of the second Test at Dubai. In the process, he became the oldest (37 years) batsman to score century in Test Cricket. Misbah reached to his century by scoring 15 runs off the last over of the day. No England batsman would have considered the possibility of hitting 13 off the last over of the day: play for the team, see it through to the close, start again in the morning. That’s why world cricket needs Pakistan, as a team that still prefers the spontaneous to the methodical. Courtesy of his century, Pakistan have reached 282 runs for four wickets at the end of day 1 of the second Test. For Pakistan, Yasir Shah was fit so he was included in the playing eleven. Azhar Ali has still not recovered from his injury so was not able to take part in this game. 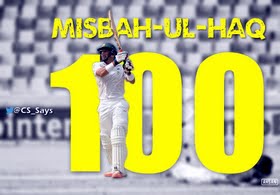 Pakistan were in spot of bother when they were reduced to 85 for three after winning the toss and batting first. Misbah came out to bat just a ball after the lunch and started blocking everything that came his way. He scored his runs in just two gears, either blocking, blocking and blocking or hitting the spinners over their head for six and reverse sweeping them. England started the day defensively when they gave ball to Moeen Ali in the morning session. Moeen kept bowling tight over and ensured that he do not concede too much runs and fast bowlers were rotated from the other end. This strategy worked fairly well for most of the day. Indeed it worked fairly well until the 90th and last over of the day when Misbah, behind his inscrutable exterior, decided he wanted to reach his century – only his ninth in Tests, and none in white-ball internationals – before the close. Younus was well-set when he gloved a ball of lively bounce from Wood down the legside. Shan Masood had also reached 50, a fine recovery from being bounced out for three runs in Abu Dhabi. Masood had also made 50 when playing for Durham University in 2011, when he studied sports management, against a Durham side including Wood and Stokes. Moeen Ali provided the first breakthrough for England when Mohammad Hafeez was caught by Bairstow. Last game double centurion Shoaib Malik, failed to deliver in this game and got out cheaply without troubling the scorer much.

England will look to bowl out Pakistan early in the morning on day two so that Pakistan can’t take the game away from them.