The route to the semi-final in Group 2 is now rather clear. The India-Australia clash on Sunday will now be a virtual knockout, as whoever wins will progress to the final four, with New Zealand already having made it

The route to the semi-final in Group 2 is now rather clear. The India-Australia clash on Sunday will now be a virtual knockout, as whoever wins will progress to the final four, with New Zealand already having made it. This was possible as the Aussies put up a competent all-round performance to eliminate Pakistan, who were once again under par. Batting first, Australia amassed 193 for 4 at Mohali, Steven Smith coming to the party with an unbeaten 61 while Shane Watson blasted a super-quick 44 not out. James Faulkner then claimed a five-for making great use of his slower balls as Pakistan ended with 172.

It was the partnership between Smith and Watson, who had announced his retirement prior to the match, which gave Australia a match-winning target. Watson and Smith added a smashing 74 in only 38 balls. They took on Mohammad Amir and Mohammad Sami, who conceded 92 runs as a pair in their combined eight overs, as Pakistan struggled. More significantly, they even failed to claim a wicket. Wahab Riaz and Imad Wasim were among the wickets, picking up two each. But, Smith, Watson and, before him, Glenn Maxwell, did not allow Pakistan to settle into any sort of rhythm. 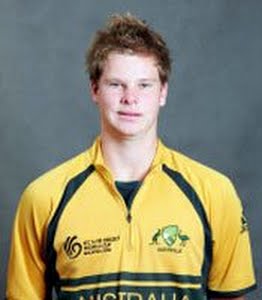 When Smith and Maxwell joined hands, Australia were in a decent position at 119 for 4 in the 14th over. But, it was crucial that they finished on a high. The experienced duo ensured the same. The 17th over bowled by Amir was taken for as many runs. Smith began by slicing a four over backward point. Watson then joined in slamming a length ball for six over long-on, and then picking a four through backward point. Smith soon raised his fifty while Watson proceeded to loft Sami inside out for six over extra cover. This was followed by another four by Smith through backward point.

Once Australia finished on a high, Pakistan needed to start confidently. Sharjeel Khan took Nathan Coulter-Nile for three fours in his first over, as the bowler pitched it short and wide, and was punished accordingly. But, Ahmed Shehzad soon top-edged the recalled Josh Hazlewood to Coulter-Nile. Sharjeel then fell for 30 as he dragged Faulkner on. From there, it was all Faulkner even as Umar Akmal and Shoaib Malik kept finding the boundaries and reduced the margin of defeat for Pakistan, one Watson over went for 17. Adam Zampa found a way through Umar before leaving Shahid Afridi stranded down the pitch. Faulkner’s variations were too good for the rest.

Things began on a much more optimistic note for Pakistan as Amir and Sami beat Usman Khawaja on a few occasions. Khawaja managed to find a couple of boundaries, but his innings ended on 21 as Wahab Riaz found his middle-stump. Riaz also got David Warner, bowled with one that came back in. Aaron Finch’s recall innings did not last long. On 15, Imad Wasim beat his defence with an arm ball that kept low. Thankfully for the Aussies, Smith got his eye in, and Maxwell chipped in taking on Sami. Watson then came in and made the difference.