With Australia scratching their way to victory in the third ODI to secure a crucial 2-1 lead, Sri Lanka now find themselves in a do-or-die position as they look to stay alive in the series when they take on the world champions in the fourth match of the five-day series at Dambulla on Wednesday.

With Australia scratching their way to victory in the third ODI to secure a crucial 2-1 lead, Sri Lanka now find themselves in a do-or-die position as they look to stay alive in the series when they take on the world champions in the fourth match of the five-day series at Dambulla on Wednesday. Sri Lanka fought hard in the previous match to run the opponents close, but they just could not do enough to finish on the winning side. Australia, on the other hand, excelled with the ball, and did well enough with the bat to overcome the hosts. Their target on Wednesday will be to seal the series with a game to go.

Sri Lanka suffered in the previous ODI because their batting let them down in a big way. While Dinesh Chandimal continued to impress with a century, the rest, barring the retired Tillakaratne Dilshan to an extent did not do much. Speaking of Dilshan, with him having retired, Sri Lanka will now be forced to alter their opening combination. Danushka Gunathilaka failed in the last game, but with not too many options left, particularly with Dilshan gone, Sri Lanka will have to continue with him. And, in all probability, Kusal Perera should come in at the top, to open the innings with Gunathilaka, in place of Dilshan.

As Sri Lanka look to stay alive, they will seek significant contributions from the middle order. Kusal Mendis showed in the Tests that he is a special talent. He now needs to replicate the same in one-dayers as well. Runs will also be needed from skipper Angelo Mathews and Dhananjaya de Silva. If Sri Lanka can sort their batting, they can give Australia a run for their money, for their bowlers have troubled the opposition batsmen. Amilo Aponso has been highly impressive, proving why he is rated so highly in Sri Lanka. Dilruwan Perera too has troubled Australia, even when the pressure has not been on.

As for Australia, they would be most pleased with their bowling effort in their previous match. In spite of a couple of batsmen getting their eye in, they still managed to restrict the Lankans to a very much gettable total. In spite of being a spinner, Adam Zampa has proved to be highly effective against the Asian opponents. At the top and towards the end, Mitchell Starc has ensured that there is no room to relax for the Lankans. Then, there is also the death overs specialist James Faulkner, who has continued to keep the batsmen on the backfoot. Josh Hazelwood and John Hastings are weak links, but Lanka haven't been able to exploit the same. 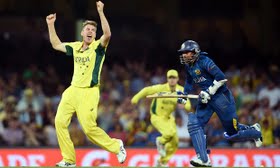 In comparison to the bowling, batting is a definite worry for the Australians. In both the games that they have won, batsmen took them home in nervous circumstances. George Bailey was the key to Australia's chase in the last match. He hung around long enough to ensure victory for the visitors. But, with both skipper Steven Smith and now Shaun Marsh ruled out due to injury, Australia will be expecting more out of their stand-in leader David Warner. With Usman Khawaja coming in, he will also get an opportunity to make an impact. Batting is one area Australia must be wary of.