India need 8 wickets on final day to force a win

South Africa have their backs to the walls going into the final day with 8 wickets in hand to save the First Test at Johannesburg. After a wonderful opening partnership, SA lost two prized wickets to end Day 4, 320 runs away from an improbable victory.

South Africa have their backs to the walls going into the final day with 8 wickets in hand to save the First Test at Johannesburg. After a wonderful opening partnership, SA lost two prized wickets to end Day 4, 320 runs away from an improbable victory.

Alviro Petersen led the way for the Proteas remaining unbeaten on 76 from 148 balls with 9 fours. Petersen got through a 108-run opening stand with Skipper Graeme Smith. India struggled to get their first breakthrough and at one moment it looked as if SA were off to a great platform to chase down the target of 458. A slice of luck for India in the 31st over saw Ajinkya Rahane pounce onto a Graeme Smith drive at mid on and fired a direct throw to run out the latter by half a yard. Smith was looking really good with his 44 (from 73 balls with 6 fours). 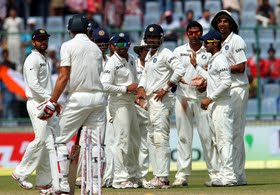 Under gloomy conditions, SA lost their second wicket as Hashim Amla got out in a freakish manner. Amla (4) had sat down early to evade an attempted bouncer from Shami but the ball had scooted low to brush his arm and peg back the off stump!

The rest of the session saw Petersen ensure safety for the Proteas along with Faf du Plessis (10*) with the latter promoted at no.4. India had to resort to slow bowlers in the end because of the fading light. Skipper MS Dhoni provided some comic relief by alternating between keeping and bowling for a couple of overs.

Update at Tea on Day 4: South African openers survived the tricky one hour period before Tea to keep their wickets intact. The hosts are 38 for no loss in 11 overs with just a few deliveries going past the bat. There was an early scare though when Virat Kohli dropped a tough overhead catch at leg gully to an uppish flick from Graeme Smith off Zaheer Khan. At Tea, Alviro Petersen is on 28* while Graeme Smith is on 9*. There are still 34 overs left in the day’s play for the Proteas to see through.

Update of India 2nd inngs: India were bowled out for 421 in their second innings, about an hour after the completion of the lunch break. This leaves South Africa with an improbable target of 458. The writing is on the wall of an Indian victory and the only things that could spoil it is rain!

R Ashwin was the first to be dismissed after Tea, caught at covers with a leading edge, playing a backfoot flick early off Philander. Skipper MS Dhoni smacked an upper cut off the same bowler into the hands of deep point after a 44-ball 29. Leggie Imran Tahir wrapped up things removing Ishant Sharma (lbw to a googly) and Mohammed Shami (bowled by a googly in a slog sweep). Zaheer Khan chipped in with a useful 29* from 31 balls which included a couple of sixes off Imran Tahir over extra covers and off Dale Steyn over wide long off.

Update at Lunch on Day 4: Although the going was slow, India ensured that they gave no chance for a South African victory by stretching their overall lead to 394. Just the 74 runs were collected by India this morning in 28.2 overs but they ensured that there was no batting collapse like it was on Day 2 and Day 3. India at lunch on Day 4 are sitting pretty at 358 for 6.

Overnight batsmen Cheteshwar Pujara and Virat Kohli saw through the second new ball threat from Steyn and Philander. Pujara scored his 4th score of 150+ in Tests but got out soon after that, edging his cut shot off Kallis to the keeper. The 25-year-old finished with 153 from 270 balls with 21 fours while piling up what could be a match-winning stand of 222 runs with Virat Kohli. Kallis who broke this massive stand cleaned up the off stump of Rohit Sharma (6) with one that jagged back a long way and stayed very low after hitting a crack.

The biggest disappointment followed after that for India with Virat Kohli getting out just four runs short of what could have been his second hundred of the match. Kohli looking to play the late cut, top edged a bouncy straighter one from JP Duminy to slip having scored 96 from 193 balls with 9 fours.

At the stroke of Lunch, Ajinkya Rahane (15) lost his wicket, edging a straighter one Duminy to slip. India would now depend on Skipper MS Dhoni (16*) to get some quick runs to finish with a much bigger lead after lunch.