Revealed: Why Dhoni walked in ahead of Yuvraj in World Cup 2011 final

One of the biggest masterstrokes in the World Cup till date has been MS Dhoni promoting himself ahead of the in-form Yuvraj Singh in the 2011 World Cup final against Sri Lanka at the Wankhede Stadium in Mumbai. Chasing 275, India were in trouble at 114 for 3 when Virat Kohli was dismissed for 35. Everyone expected Yuvraj to walk in, but it was skipper Dhoni who emerged from the Indian dressing room.

The move completely turned the match on its head as Dhoni, who had struggled in the tournament till then, featured in a century stand with Gautam Gambhir to take India towards World Cup glory. Dhoni hit an unbeaten 91 from just 79 balls in the final while opener Gambhir made a dogged 97 from 122 balls before a rash shot against Thisara Perera denied him a century. 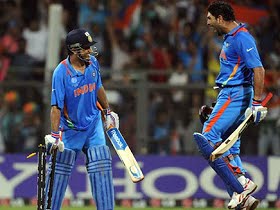 Yuvraj (21 not out) later joined Dhoni as the two took India past the winning mark with 10 balls to spare. Dhoni scored the winning runs with an iconic six off Nuwan Kulasekara. Reliving the match, Sachin Tendulkar and Virender Sehwag, openers in that match, who fell cheaply, opened up to Times of India, over the smart decision to send Dhoni ahead of Yuvraj in the final.

"The partnership between Gautam and Virat was flourishing and we wanted to be a couple of steps ahead of the opposition. That's when I told Viru 'if a left-hander (Gautam) gets out now, a left-hander (Yuvraj) should go in, and if a right-hander (Virat) gets out, a right-hander (Dhoni) should go in. Yuvi was in tremendous form but Sri Lanka had two off-spinners going, so I thought a strategy change would work," Tendulkar explained.

"He was right. Left-right combination needed to continue. That change in strategy completely caught the Sri Lankans off guard," Sehwag chipped in.

"There were two quality off-spinners in the attack so a left-hand, right-hand strategy made sense. Gautam was batting brilliantly and someone like Dhoni could've kept rotating the strike. So I told Viru, 'tu overs ke beech mein sirf ye baat bahar jaake MS ko bol aur next over shuru hone se pehle waapis aaja. Main yahan se nahi hilne wala (Just go out into the balcony between the overs only to say this much to MS and come back fast before the next over begins. I'm not moving from here)," Tendulkar further revealed.

"Before he could even complete his sentence, we saw MS walking into the dressing room. So, that's when he repeated the same thing to MS, in front of me," Sehwag, who was dismissed second-ball by Lasith Malinga in the final, recalled to Times of India.

"I asked MS to consider this strategy. He then went to Gary (Kirsten), who was sitting outside. Then Gary came in and all four of us got talking about it. Gary too agreed it was the right thing to do, given the attack on hand. MS also agreed and promoted himself up the order," Tendulkar, who was dismissed for 18 from 14 added.

Thanks to the combined decision of Team India, the hosts lifted the World Cup after 28 years.