We witnessed yet another thriller featuring the Delhi Capitals as they rolled past the Chennai Super Kings to top the points table. Chasing 180, Dhawan batted through while getting a century, but it was Axar Patel who smashed three sixes in the final over to guide them home.

MS Dhoni won the toss and chose to bat first, but his team got off to one of the worst possible starts as Curran got out on the third ball of the match. Rabada bowled a maiden the next over as CSK’s score at the end of two overs read 2-1. However, Watson and du Plessis combined to up the scoring rate. The batsmen first took on Nortje for 14 in the 5th over and Ashwin for 15 in the 10th over as they reached 71-1 at the end of 10 overs.

Just as both the batsmen decided to go all guns firing, Nortje disturbed Watson’s timber. Rayudu had also come to bat with a positive intent as he slog swept Ashwin for a six. Du Plessis was following the approach of stand and deliver given his collision against Rabada. He got out after getting to his fifty and at the end of 15 overs, CSK were at 112-3.

CSK would have settled for anything around the 160 mark from that point, but they got a lot more than that courtesy a dangerous stand between Rayudu and Jadeja. After Dhoni edged Nortje behind, Jadeja partnered with Rayudu to give CSK a real lift as they smoked 32 off the final two overs. Both Rabada and Norje were expensive as Jadeja, Rayudu smashed four sixes each. CSK finished at a commendable 179-4. 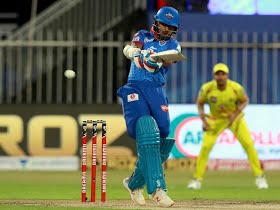 The target ahead of Delhi was a stiff one, especially given the fact that they were yet to win chasing this season. Prithvi Shaw threw his wicket yet again as he was dismissed a duck, twice in as many games. Deepak Chahar was bowling some tight lines and gave away only 12 runs in the first three overs. Rahane took time early on, but after a crunch pull shot, perished to Chahar to leave Delhi reeling at 26-2.

Dhawan had picked up from where he had left in the last game and started confidently against Curran with two boundaries in his first over. Iyer played a beautiful loft down the ground against Thakur to give some support to his deputy. Dhawan continued his sweet hitting with successive boundaries off Jadeja and Karn Sharma, and soon brought up his third fifty in a row.

The plan for Delhi was to get a boundary per over and take it to the end. However, Iyer played a rather irresponsible shot against Bravo to give CSK an opening. Stoinis took on Karn Sharma as early as the fourth ball he faced by smashing him for a six and a four. Dhawan was dropped for the second time, this time by Rayudu, which would later go on to prove very costly. Stoinis was dismissed though, a ball later when he skied one high off Bravo.

With 41 required in 24, Dhawan slammed Curran for a six and a four to get his team back on top. Alex Carry got out cheaply but by that time, only 21 were required from 11 and it was Delhi’s game to lose from thereon. Sam Curran bowled a fine penultimate over by giving just 4 runs to effectively win his team the match as 17 were required off the final over. Dhawan, who got to his maiden century, was still having an uphill task to achieve. With Bravo unavailable to bowl the final over, MS went with Jadeja, a decision which was still strange with two left handers at the crease. Axar Patel smoked three sixes in the final over as Delhi managed to cross the line on the penultimate ball of the match.