Those who witnessed Shikhar Dhawan’s debut ton on day three of the Mohali Test at the ground or even on their television sets would have been bamboozled for sure. Most would have asked themselves only one question..

Those who witnessed Shikhar Dhawan’s debut ton on day three of the Mohali Test at the ground or even on their television sets would have been bamboozled for sure. Most would have asked themselves only one question – was the batsman they were witnessing tear apart the Aussie bowling attacking indeed playing in his Test debut? Yes, he was, but Dhawan never made it seem like he was playing his first ever Test innings. The 27-year-old batted as if it was just another domestic fixture for him, and no this is not an exaggeration.

For those who missed the master class, here are numbers that can only give on a vague idea of the carnage the hapless Australian bowlers were subjected to. Having batted for 163 balls, he caressed his way to 185 courtesy 33 boundaries and two sixes. The genius of Dhawan’s knock can be gauged from the fact that his opening partner, the usually aggressive Murali Vijay, faced more deliveries, but ended up with a way lower score, albeit a significant one himself. Having faced 181 balls, Vijay ended the day with 83 not out with the help of 10 fours and two sixes. 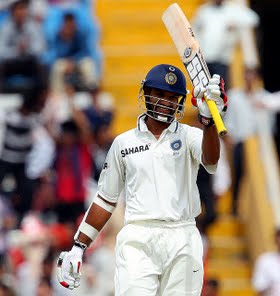 What was most amazing about Dhawan’s knock was his composure right from the start of the innings. He played every shot in the book, and as he mentioned at the end of the day, he only played the bowling according to merit, and did not go out of the way to be aggressive, as his figures may suggest. The only time when Dhawan looked under pressure was when he was on 99 – that rushed run he took was a faint reminder of the fact that this was indeed a man playing in his first Test, and that he wasn’t completely nerveless.

Take that one moment of adrenaline rush away, and it was a flawless knock in every sense of the imagination. The best part of Dhawan’s historic innings was that he never seemed hurried during his innings. He raced to his century off a mere 85 balls, but hardly slogged a delivery. In addition to that, he played almost every shot in the book, never looking in any sort of discomfort during his stay at the crease that lasted two sessions and a bit, on a run-filled day three. When the ball was pitched short, he pulled and hooked with ease, and the flowing drives from his bat were equally eloquent. So comfortable was Dhawan at the crease, one wondered if the Aussies could dismiss him even if he batted with his eyes closed!

Even if one takes into considering that this is among the weakest Australian bowling attacks to visit India and also the fact that the pitch played its best, with even Aussie number nine Mitchell Starc getting a sublime 99, no credit can be taken away from Dhawan’s knock. Getting 185 in two sessions against any attack is an incredible feat, and one that will be very difficult to match. In a sense, Dhawan was only carrying forward the Delhi legacy in the Indian team, having replaced his senior statemate Virender Sehwag, whooften played similarly incredible knocks. For sure, even ‘Viru paaji’ would have only admiration for Dhawan’s brilliance.