Trinidad and Tobago vs Yorkshire , Qualifying Pool 2 at Centurion, 10 Oct, 2012.

Toss: Trinidad and Tobago, who choose to bat first 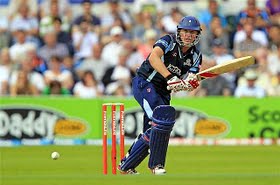 Yorkshire comfortable six-wicket win over Trinidad and Tobago in Centurion on Wednesday.

After limiting Trinidad & Tobago to 148 for nine, Gary Ballance and Adil Rashid shared an unbroken century partnership to seal victory in 18.5 overs.

Openers Phil Jacques (6) and skipper Andrew Gale (2) failed to provide any significant contribution for the English outfit and perished in consecutive overs.

Joe Root (16) and Adam Lyth (18) both got starts but failed to capitalise on them and became victims of Yannick Ottley and Rayad Emrit, leaving Yorkshire's chase in disarray at 51 for four.

Trinidad & Tobago lost wickets in clutches although had a partnership of 93 between Denesh Ramdin (59) and Darren Bravo (45) to thank for a recovery from eight for three.

Ryan Sidebottom returned outstanding figures of three for eight including two wickets in two balls towards the tail-end of Trinidad's innings.

Ballance (MOM): 'Absolutely delighted to get to the main tournament. I was under a bit of pressure but I knew I could do it. The idea was to get a boundary in every over and take it to the end.
Gale: Extremely happy to qualify. We're over the moon. Obviously at 8/3 we thought we could bowl them out for less than a 100 but they got a partnership. Still, their score was a bit below par and we knew we needed only one good partnership. Ballance has played some special knocks for us. Adil Rashid is known for his bowling but he was exceptional. We'll celebrate tonight and head to Cape Town for the rest of the tournament
Ramdin: 'The score was good enough. Myself and Bravo had a partnership and we got to a good score. A score of 160-165 would have been better. In the middle overs, Ballance and Adil Rashid batted sensibly and our bowlers couldn't execute the plans
Yorkshire won by 6 wickets and qualify for the main tournament. Trinidad and Uva Next are out of the tournament.