Andrew Strauss announces retirement from all forms of the game!

England Test Captain Andrew Strauss has surprised the cricketing world by announcing his retirement from professional cricket with immediate effect. The ECB has announced that Strauss’ fellow opener Alastair Cook will take over from him as England’s new Test Captain.

England Test Captain Andrew Strauss has surprised the cricketing world by announcing his retirement from professional cricket with immediate effect. The ECB has announced that Strauss’ fellow opener Alastair Cook will take over from him as England’s new Test Captain. Cook, who is just 27 years of age has been leading England in the ODIs recently.

It was unexpected news for cricket fans all around the world as Strauss is just 35 years of age. First impression of this news is that it could have been influenced by the Kevin Pietersen controversy that has affected English Cricket big time in the last few days. However, it is learnt that Strauss’ decision to quit cricket is mainly because of his lean patch with the bat in recent times. 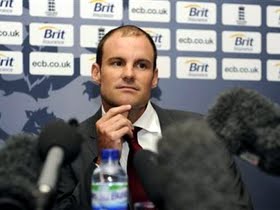 Andrew Strauss has not just announced his retirement from International Cricket but also from first class cricket. So Middlesex too will miss the services of the left-handed opener just like England. Strauss made his International Debut in 2003 in an ODI against Sri Lanka at Dambulla. A year later, he made his Test Debut against New Zealand at Lord’s.

Strauss has retired with exactly 100 Tests in which he scored 21 centuries and 27 50s while collecting 7037 runs at an average of 40.91. His career best in Tests was the 177 which was scored against New Zealand in 2008 at Napier. Out of the 100 Tests that he has played, Strauss has been England’s Captain for 50 Tests with an impressive 24 victories. Under Strauss, England had won two Ashes and became the no.1 Test team in the world.

As far as the ODI format is concerned, Strauss played in 127 matches scoring 6 centuries and 27 50s. Overall he scored 4205 runs at a modest average of 35.63 and at a strike rate of 80.94. Strauss’ career best in ODIs came in the tied match of the ICC World Cup 2011 against India at Bangalore. Strauss had also played in 4 T20Is with little impact.

Talking about his decision to retire, Strauss has been quoted to have said: “After much thought over the last few weeks, I have decided to step down as England Test captain and announce my retirement from all forms of cricket.

"It has clearly been a tough decision to make, but I believe that it is both in the best interests of the England cricket team and myself to step down at this stage.

There are too many people who have helped me on this incredible journey to mention them all by name, but I would like to thank all the Middlesex and England players I have played alongside, as well as the phenomenal coaches and support staff with whom I have been fortunate enough to work.

Particular mention has to go to Andy Flower and Duncan Fletcher in that regard. It would also be remiss of me not to thank Middlesex county cricket club, the ECB and the PCA for their support and guidance over the years.

No-one can play international cricket for any length of time without having an incredibly strong support network around them, and I'd like to take this opportunity to thank my family for going through it alongside me over the course of my England career.

I am extremely proud of everything I have achieved as a cricketer, and I have found myself very fortunate to play in an era when some of English cricket's greatest moments have occurred.

I have loved every minute of it and all that remains is for me to wish Andy, Alastair and the rest of the team the very best for the coming months. I will be an interested spectator."