It has been seen time and time again that in conditions where the ball moves around, even if they are on home pitches, the Indian batsmen struggle. The second day of the Bangalore Test reiterated this theory to great effect.

It has been seen time and time again that in conditions where the ball moves around, even if they are on home pitches, the Indian batsmen struggle. The second day of the Bangalore Test reiterated this theory to great effect. After posting a challenging score on board, the New Zealand pacers had India on the mat, and had it not been for Virat Kohli, who played saviour for India yet again, the Kiwis could very well have held the upper hand at the end of the second day’s play in the Test. Thanks to Kohli India have reached a comfort zone in the game for now, even though they are still 82 runs behind New Zealand’s first innings tally. 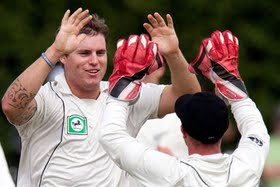 More of Kohli later. New Zealand’s pace bowling trio of Southee, Bracewell and Boult deserve credit for the manner in which they troubled India’s experienced batting line-up, and that too in the latter’s backyard. Some of the dismissals were symptomatic of the batsmen’s state of mind. Gautam Gambhir, who has been having a torrid time trying to control the poke outside off stump that gets him out every second game, this time did the other extreme. His shouldering arms act allowed the ball to make contact with his exposed stumps. Clearly, the Aussie tour still seems to be playing on Gambhir’s mind, and his Test form continues to be wretched as he tries to find a solution to the inviting ball floated outside off stump.

Gambhir’s opening partner, Virender Sehwag, has got into the habit of throwing his wicket away after getting starts. For the second time in a row, and for the umpteenth time in recent Tests, Sehwag fell to a loose stroke after getting his eye in. The experienced Indian dasher was patient at the start, before getting into his flourishing zone, raising hopes that he is in for a big innings. However, it turned out to be a false alarm as he departed soon after.

New Zealand, bolstered by the start, and aided by the conditions, made India look miserable for the best part of the 25 overs. Cheteshwar Pujara was bound to have a failure following his exceptional effort at Hyderabad. He could be excused for not being able to hang around long enough, but another failure for the great man Sachin Tendulkar, yet again bowled through the gate, raises serious questions over whether it is time for the Mumbai maestro to join VVS Laxman and Rahul Dravid in the ex-cricketers club. Something for the master to ponder upon, isn’t it?

While it was great to see the New Zealanders putting up a fight on both days of the Test thus far, India have to thank Kohli for saving them the blushes. But for his mature knock, and his face-saving partnerships with Suresh Raina, who got a much-needed half-century, and M S Dhoni, India could have been in big trouble. They still could be in a spot of bother if Kiwis knock over the Indians early on day three.