Shikhar Dhawan scored a scintillating 185* on Test debut as India smashed 283 for no loss in just 58 overs in reply to Australia’s first innings total of 408 on Day 3 of the 3rd Test at Mohali.

Shikhar Dhawan scored a scintillating 185* on Test debut as India smashed 283 for no loss in just 58 overs in reply to Australia’s first innings total of 408 on Day 3 of the 3rd Test at Mohali. Dhawan deflated the Australian attack completely scoring his 185 not out in just 168 balls with 33 fours and 2 sixes. Murali Vijay, his opening partner played a perfect second fiddle to help himself to 83* (from 181 balls with 10 fours and 2 sixes).

India have brought down the deficit to just 125 runs thanks to the blazing strokeplay from the left-handed Shikhar Dhawan who proved that he can be as destructive as Virender Sehwag whom he had replaced in the Indian XI. Dhawan’s century which came in just 85 balls is the fastest Test century on debut comfortably beating the previous record held by Dwayne Smith who scored his hundred in 93 balls against South Africa. 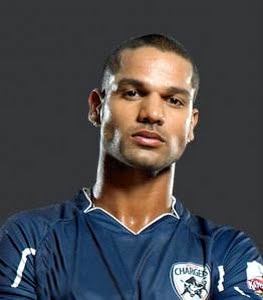 The Test match is now nicely set up by Dhawan with India scoring its runs at a tremendous rate of 4.87. The hosts will be looking to keep up the tempo and collect a sizeable lead before testing the Aussies under spinning conditions yet again.

The last session saw Shikhar Dhawan keep his nerve to prolong his innings. He could have so easily thrown it away after reaching his hundred but the Delhi youngster showed good maturity to hang in there and bat Australia out of the contest. Murali Vijay at the other end continued his good form to keep the opening partnership going. India collected 127 runs in 29 overs in the last session without losing a single wicket.

Update at Tea on Day 3: A tremendous afternoon session saw debutant Shikhar Dhawan race away to a Century on Test debut in just 85 balls with the help of 21 fours. The 27-year-old Dhawan was simply superb with his drives on the up, the pull shots which all came with impeccable placement and timing. He became the 13th Indian to achieve this feat of scoring a century on Test Debut. The last player to achieve this feat for India was Suresh Raina in 2010.

At Tea, India had motored along to 156/0 in just 29 overs with Dhawan on 106* while Murali Vijay quite content to move onto 42*. While Dhawan was aggressive with his ground shots, Vijay used his feet often to go over the top against the spinners. It was Dhawan who blazed along though, hitting quite a lot of boundaries through the extra cover region. The Aussies with just two respectable fast bowlers in Starc, Siddle and the B grade bowlers to follow after that had no answer to Dhawan’s majestic strokeplay.

Update at Lunch on Day 3: Australia went onto score 408 thanks to its overnight batsmen Steven Smith and Mitchell Starc. Both the overnight batsmen were unlucky not to get their maiden Test Centuries, in particular Mitchell Starc who got out on 99. India finished the morning session at 3 for no loss batting out 1 over before the break.

It took about an hour and 12 minutes for India to find their first breakthrough on Day 3. Steven Smith got a cracker of a delivery from Pragyan Ojha that spun away sharply from middle to beat his forward defence. Smith (92 from 185 balls with 10 fours and a six) who was lunging forward had his backleg on the crease line when MS Dhoni quickly whipped off the bails to have him stumped out. Steven Smith’s partnership with Starc was worth 97 runs for the 8th wicket.

After Smith’s exit, all the focus was on Mitchell Starc who looked very solid in defence and attack and was fast approaching a maiden Century of his life. Just when the 100 was there to take, Starc nervously slashed outside off to an away going delivery from Ishant to get caught behind by the diving MS Dhoni. Starc did all the hard work to get to 99 but failed to get that one run which would have been his first class century as well. His 99 came in 144 balls with 14 fours.

Australia’s last wicket fell when Xavier Doherty was adjudged lbw to a flatter drifter from R Ashwin. The visitors were bowled out for 408 in 141.5 overs. India had to bat out an over before lunch which they did without losing any wickets.

Build Up to Day 3: Today is a crucial day in the Third Test at Mohali. Time is running out for a result and it is all upto India if they can quickly take the remaining three wickets and then set themselves up for a big lead by the penultimate day. Australia realistically cannot win the Test match from this position of 273 for 7 and ideally they would look to kill time and eke out as many runs as possible with Steven Smith at the crease.

The pitch at Mohali is full of small cracks and it did take turn yesterday. So the spinners will be in business right through this Test match while the pacers will get reverse swing.