On a roll, Kolkata Knight Riders will look to continue their winning run when they face hosts Mumbai Indians in a high-voltage clash at the Wankhede stadium on Thursday. Kolkata go into the contest with having won four out of their five matches

On a roll, Kolkata Knight Riders will look to continue their winning run when they face hosts Mumbai Indians in a high-voltage clash at the Wankhede stadium on Thursday. Kolkata go into the contest with having won four out of their five matches, including their last game against Rising Pune Supergiants, and are sitting pretty at the top of the points table. On the other hand, Mumbai have had a mixed run. They have won three and lost four out of their seven matches. They will however go into the clash against KKR on a high, having defeated Kings XI Punjab rather comprehensively in their previous encounter.

On current form, Kolkata look the better side. At the same time, they would be aware that the only defeat they have tasted in the tournament has come against the opponent they will be up against on Thursday. That said, Kolkata will look to continue doing what they have been so successful at so far. At the top, they would again depend on Gautam Gambhir and Robin Uthappa. The openers had a rare failure in the last match, so they will be keen to get back among the runs. Also, failures of Uthappa and Gambhir proved to be a blessing in disguise as it allowed Suryakumar Yadav to flourish. Yadav's 60 was instrumental in keeping the team in the match and, in the end, it made all the difference.

All-round prowess has been one of the keys to Kolkata's success over the years, and this season has been no different. The veteran Yusuf Pathan hasn't had a great time so far, but the management has placed faith in him, and he delivered with a crucial knock under pressure in the last match. Then, there is Andre Russell, whose x-factor is definitely proving to be an asset for KKR. Shakib Al Hasan may be struggling with the bat, but he remains a key spinner. In the bowling department, Kolkata will consider themselves lucky to have abundant talent. Morne Morkel and Umesh Yadav are good choices in the pace department while Sunil Narine and Piyush Chawla handle the spin responsibility.

Mumbai have some work to do although they overcame Punjab in impressive fashion. Their skipper Rohit Sharma has played only one innings of note, and that came against Kolkata. Rohit will want to repeat the heroics he came up with the last time these two teams met. At the same time, they would be pleased with the form Parthiv Patel showed under pressure. He was due for a big score, and got it against Punjab. Ambati Rayudu also batted extremely well in company of Patel. In Jos Buttler and Kieron Pollard, they have two massive hitters of the cricket ball, who are yet to demonstrate their full potential. Mumbai will be expecting great things from them. 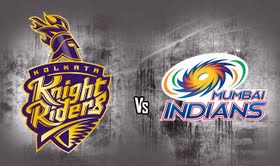 In comparison to their batting, which has been inconsistent, the bowlers have done reasonably well. Mitchell McClenaghan has picked up wickets, and has been economical at the same time. He has been supported nicely by Tim Southee although more is being expected of the fellow Kiwi. Veteran off-spinner Harbhajan Singh has brought all his experience into play and has kept things tight. Then, there is also Jasprit Bumrah, who has taken his good international form into the IPL as well. In Pandya brothers, Krunal and Hardik, they have two utility players. All said and done, a close contest could be on the cards.