While Chennai, Mumbai, Rajasthan and Hyderabad have qualified for the play-offs following some superlative performances and the talented Delhi have shocked all by finishing last, for four other sides...

While Chennai, Mumbai, Rajasthan and Hyderabad have qualified for the play-offs following some superlative performances and the talented Delhi have shocked all by finishing last, for four other sides, including a couple of big ones, it was a case of not being good enough to make it to the next round. Here’s a closer look at how the four teams, who have not made it to the play-offs, have performed. 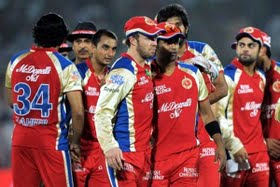 Royal Challengers Bangalore: For RCB, it has been a hat-trick of sorts, one they wouldn’t look back at too fondly. For the third year in a row, Chris Gayle has proved to be the most destructive batsman in the league, but this year as well Bangalore won’t their hands on the trophy. In 16 matches, Gayle has blasted 708 runs at a stunning strike rate of 156. As of now, he remains the top run-getter in the tournament. Sadly, he won’t get a chance to extend his lead. Gayle’ smashing 175 not out will remain the fondest memory of the league. Alas, his team has disappointed him yet again. Skipper Virat Kohli also made an impression with 634 runs in 16 games, but nothing much came from the rest, especially the bowlers.

Kings XI Punjab: The Adam Gilchrist-led squad continued to disappoint. They featured in 16 matches, but managed to win only half of them, as a result of which they ended up with 16 points, and in sixth position, with a net run rate lower than RCB. David Miller was among the few bright spots for Punjab, with 418 runs from 12 games. The left-hander from South Africa smashed his runs at a sensational strike rate of 165, even blasting a century. Gilchrist came to the party, but a bit too late. Azhar Mahmood picked up 15 wickets for the side from 11 games. Their overall bowling wasn’t too threatening though.

Kolkata Knight Riders: The defending champs had a disastrous season, bowing out with only six wins and as many as 10 losses. A lot was expected of them following their renaissance last season, but it wasn’t to be. Skipper Gautam Gambhir was the top scorer for Kolkata. However, 406 runs from 16 games with a highest of 60 aren’t impressive figures. Yusuf Pathan managed only 332 runs from 16 matches, which made things difficult for KKR. The other big names in the batting department also failed. Sunil Narine grabbed 22 wickets for KKR, but it was more of a one-man show from him with the ball.

Pune Warriors: What can one say about Pune apart from the fact that they just haven’t learnt the art of winning? Having completed their 16 games, they ended up winning just four and losing 12. Aaron Finch and Robin Uthappa scored over 400 runs for the side, but they never fired as a team. Even with Finch and Uthappa, they could have scored more runs that they eventually did, but kept falling after getting stars. Their bowling was nothing to write home about. Ashok Dinda picked up 16 scalps, but he has also been among the most expensive bowlers of the tournament.