Shikhar Dhawan and Virat Kohli featured in an impressive partnership of 94 as India lifted the Asia Cup for the sixth time with an eight-wicket victory over Bangladesh in a rail-curtailed at Mirpur on Sunday. Chasing 121 for victory in 15 overs, India began nervously as Rohit Sharma edged Al-Amin Hossain behind the wickets. But, Dhawan made 60 from 44 and Kohli again remained unbeaten, this time on 41 from 28 balls. India were under a bit of pressure when Dhawan fell. But, as he often does in finals, skipper MS Dhoni promoted himself, and launched Al-Amin for two sixes and a four to finish on 20 from 6 balls.

Rohit looked out of sorts before he flashed away from his body. Dhawan and Kohli started slowly, but the fifth over from Abu Hider gave India some momentum. Dhawan began by edging one past the vacant slip cordon, Kohli then drilled one through mid-off, before Dhawan finished off the over by edging one between slip and keeper. The next over by Shakib Al Hasan went for 15, as Dhawan and Kohli combined to hit three fours. Dhawan’s stand out shot was smashing Mortaza for six over backward square leg. He reached 60 when he was brilliantly caught by Soumya Sarkar at point. But, it only set the stage for Dhoni to come in and do the finish job. 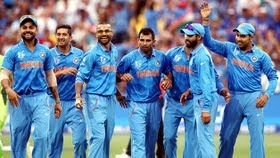 Earlier, Mahmudullah carried on his marvellous batting form, blasting an unbeaten 33 from 13 balls as Bangladesh finished their innings on a high. Bangladesh were struggling at 75 for 5 in the 12th over, when Mashrafe Mortaza departed, but Mahmudullah launched into Hardik Pandya as Bangladesh finished on a high. He began with a straight drive off Ashish Nehra, drilling one past the bowler for four. But, it was Mahmudullah’s assault on Pandya that really ensured the Bangladesh bowlers had a decent score to defend in the rain-hit final. It was an important knock as Sabbir Rahman wasn’t finding the boundaries at the other end.

Mahmudullah hit Pandya inside out through extra cover, and then smashed him for sixes over deep midwicket, and then over long on. 21 runs came off the penultimate over of the innings. Jasprit Bumrah bowled a tight last over, conceding only seven runs, as India pulled things back to an extent. India’s performance with the ball was a mixed bag – Ravichandran Ashwin and Bumrah finished with excellent figures, with one for 14 and one for 13 in their three overs. However, Nehra and Pandya conceded over 11 runs per over. Even Ravindra Jadeja struggled to an extent, giving 25 in his three.

After a slow start, Bangladesh got into some rhythm, as Tamim Iqbal hit Nehra over mid-off, and Soumya Sarkar followed up by smashing one down the ground past Iqbal, and then pulling for another four. Nehra had his revenge when he had Sarkar caught at mid-off. Bumrah then trapped Iqbal as the batsman played across the line. Sabbir Rahman and Shakib Al Hasan combined to get fours off Jadeja and Pandya’s next two overs. However, Ashwin had Shakib caught at short fine leg. Mushfiqur Rahim lost his wicket to a run-out, and Mortaza fell next ball, before Mahmuddullah walked in.