Rohit Sharma dismisses idea of four-day Tests, says, 'If it is a four-day, it is not a Test match'

Indian opener Rohit Sharma, who has been given a much-deserved break for the T20Is against Sri Lanka at home, has stated that he is a naturally calm person, which has helped him achieve great results in international cricket.

Rohit scored over 2,400 runs in international cricket. In an interview with Hindustan Times, he opened up, "A lot of the things actually come naturally to me, staying calm and all. A little bit of meditation I do also helps. Naturally also, I am a very calm person in life. So it helps me to be that way and get results." 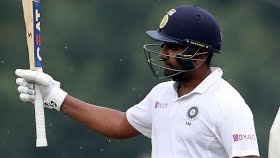 Asked about any specific goals for 2020 after a splendid 2019, Rohit affirmed, "I want to keep improving as a player, as a human being."

He was also vocal in his opposition to the idea of four-day Tests that is being floated around. "If it is a four-day, it is not a Test match. Four-day means a first-class match. It is as simple as that," he further stated in the interview.

Although Rohit scored a record five hundreds in the World Cup, the tournament ended in massive disappointment for Team India as their batting crumbled in the semi-finals at Manchester against an inspired New Zealand. Rohit himself failed, managing just one.

The veteran opener admitted that the loss was a huge disappointment, in the wake of which the centuries did not matter a lot. "It is always nice to get runs and do well for the team, but for what purpose you went there, if that is not achieved, then you are not happy.

"Personally I can say I batted well and all that, but we didn’t win the World Cup. That was disappointing, so the hundreds I scored will not matter so much. If with that hundred we could have won the tournament, I would have been two times happier," Rohit further said in the Hindustan Times interview.

Speaking of the Kiwis, India will be visiting New Zealand for a full series from late January to March. And, Rohit admitted that the series will pose a great challenge for India.

"They play as a team, and are very good in planning and execution. That is what makes them a very dangerous team, and in their backyard they play really well. I have been there before so I know what to expect," the 32-year-old explained.