All the experts termed India as the favourites against a weak Sri Lankan line up, as the short series kicked off in Pune on Tuesday. However, the Sri Lankans demonstrated that the T20 format remains highly unpredictable,

All the experts termed India as the favourites against a weak Sri Lankan line up, as the short series kicked off in Pune on Tuesday. However, the Sri Lankans demonstrated that the T20 format remains highly unpredictable, and can deliver the most unlikeliest of results on a given day. Sri Lanka were lucky in the sense that they won the toss, and got the chance to exploit the bowler friendly conditions early on. Still, India should have been confident of putting up a good score as they had plenty of experience in the batting, even in the absence of Virat Kohli. But, Sri Lanka, with relatively unknown pacers, did the trick, and outdid the Indians in the end.

While it is true that India got the tougher conditions to bat on, it is equally a fact that they failed to read the conditions well, and also did not assess the situation smartly. It was clear very early in the game that the Pune surface was no batting paradise. The first two Indian wickets came via deliveries that did not come on to the bat in the very first over. As such, India should have looked to exercise some caution. Instead, they continued going after the bowling and, as a result, kept losing wickets, thus never getting the innings into top gear. By the time Ravichandran Ashwin held things together, it was too late.

The reckless manner of the dismissals of a few batsmen definitely pointed towards overconfidence and, perhaps, a hint of arrogance. Shikhar Dhawan's wicket was a case in point. Having seen Rohit Sharma and Ajinkya Rahane depart to confused strokes in the very first over, a lot depended on the Indian opener to take the Indian innings forward. Instead, he played a mighty heave, which was nowhere near the meat of the bat. Yuvraj Singh too played a poor swipe across the line to lose his wicket. The veteran southpaw began handsomely by smashing one straight down the ground, but could not carry on. The rest, including the experienced Suresh Raina and MS Dhoni, just did not prove good enough to handle the situation.

While the Indian batsmen must be held accountable for an uninspiring show, a lot of credit must also be given to the under-rated Sri Lankan bowlers for the manner in which they rattled the famed Indian batting line-up. Kasun Rajitha was making his debut, but he bowled the perfect length for the conditions, and was rewarded handsomely. He was the chief architect of the team's victory as he claimed the first three wickets to fall. Rajitha's impressive work was carried on by another probing spell from Dasun Shanaka. Dushmantha Chameera carried on his good form while Sachchitra Senanayake kept things tight, thus not allowing the Indian innings to flourish. 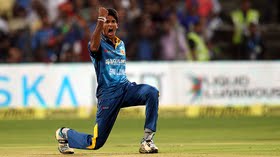 The Indian bowlers fought back hard, defending a mediocre target. Ashish Nehra bowled with fire early on, and was well supported by Jasprit Bumrah. Ashwin came in and made his presence felt with the ball as well. But, in spite of the pressure situation, Sri Lanka had enough competence which saw them through to victory. Dinesh Chandimal played a captain's knock holding the innings together. Chamara Kapugedara and Milinda Siriwardana also played key cameos, which saw them through. In the end, India's bowlers had too much to do, and Lanka were good enough to catch the hosts off guard on a bad day.