IPL 2016: Andre Russell's spell against Punjab clinched it for KKR

Kolkata Knight Riders were always favourites to win against Kings XI Punjab. But, under new skipper Murali Vijay, the Kings had shown some signs of encouragement. Kolkata, however, were too good for them.

Kolkata Knight Riders were always favourites to win against Kings XI Punjab. But, under new skipper Murali Vijay, the Kings had shown some signs of encouragement. Kolkata, however, were too good for them. On a sluggish pitch, they batted with sense, and did not go on an all-out attack. With the ball as well, they forever stayed ahead of Punjab, and in the end, were good enough to pip them. As for the Kings, it was yet another disappointing effort. Their bowlers tried a bit too hard, while their batsmen, barring Glenn Maxwell, did not come to the party.

At the halfway stage, it was anybody's game, as Punjab were chasing a gettable 165. But, they needed to get off to a good start. It was Kolkata, however, who had the impressive start. Russell played the big part in it, getting Marcus Stonis and Manan Vohra before they could even open their accounts. At the other end, the reliable Morne Morkel accounted for the dangerous opposition captain Vijay. At 13 for 13, Kolkata had the game very much in their grasp, and although Punjab made a fight back, Kolkata were always ahead in the contest.

The only time when it seemed like Punjab were in with a chance was when Maxwell blazed away. He played smart strokes, flicking and driving constantly, and finding the gaps. In the past, he has been guilty of throwing his wicket away to slog shots. The Aussie big show was extremely aware of that, and made a conscious effort to not play too many reverse sweeps. That he managed to score at a quick pace, in spite of self-handicapping himself proves the kind of repertoire he possesses in his strokes. Ultimately though, he lost patience. His dismissal to Piyush Chawla came at a crucial stage in the game.

Punjab would rue the loss of Maxwell at the wrong time, but the game was actually lost because there was no one else to support the Punjab big-hitter. At the start, Vohra, Vijay and Stonis could not provide the team with an impressive start, and towards the end, the likes of David Miller and Gurkeerat Singh let them down. Miller has been relieved of the pressure of captaincy, and if he continues to fail, Punjab may be forced to look beyond him in the batting department as well. In the bowling, apart from Sandeep Sharma and Axar Patel no one could keep things tight, even as all three wickets to fall came through run-outs. 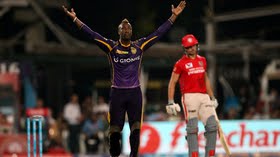 Kolkata were again aided by an excellent start by Gautam Gambhir and Robin Uthappa. Yet another century partnership from them set up the game nicely for Kolkata. Of course, they would be disappointed that they only managed 164 after the bright start. But, credit must go to Punjab bowlers for not allowing Russell and Yusuf Pathan to open up their broad shoulders. The Kolkata bowlers however read the conditions nicely to stall Punjab. Russell undoubtedly stood out, with good support from Morkel and Chawla as well. It was a well-oiled all-round effort by a team of substance.