Titans vs SH: Sunrisers should be extremely upset with their batting performance

Sunrisers Hyderabad pride themselves on putting up good team efforts. In the first game against Trinidad and Tobago they batted and bowled with great heart to clinch an impressive.

Sunrisers Hyderabad pride themselves on putting up good team efforts. In the first game against Trinidad and Tobago they batted and bowled with great heart to clinch an impressive. Their bowling was taken to the task by Chennai Super Kings, M S Dhoni in particular, but they batted with plenty of gusto to get close to a near improbable target. Thus, even though they lost, they won a few more admirers. It is in this context that their effort against Titans on Saturday was disappointing, and completely insipid. Both with the bat and ball they were below par and ended up losing their second game in a row. 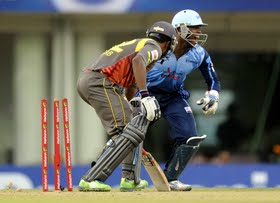 Although they were poor in most departments, it was their batting performance that cost them the game. For the second match in a row, the Sunrisers could not capitalise on a rollicking start given to them by their openers Parthiv Patel and Shikhar Dhawan. Batting first, the Sunrisers began on a highly competitive note, with both Patel and skipper Dhawan taking the attack into the opposition camp. Like in the last match, both were extremely impressive with their strokeplay. The fact that they scored at 10 runs an over during their partnership is a fair indication of their domination.

If there is one criticism that can be made of their batting, it is that neither of them went on make a substantial score after getting their eye in. Agreed, in T20 cricket, it is difficult to preserve one’s wicket for a long time since runs are of utmost importance. Then again, it is significant for at least one player to carry on from one end since it is extremely difficult for a new player to get his eye in quickly. At the same time, one cannot be too harsh on the Sunrisers openers. At least they got the team off to a bright start. It should be the middle and lower order that should take their fair share of blame.

Ideally, the likes of JP Duminy and Hanuma Vihari should have carried on from where the openers left. Instead, they kept falling one after the other. The fact that Dale Steyn ended up as the second highest scorer of the innings gives some indication of how poor Sunrisers were with the bat. In fact, had Steyn not thrown his bat around towards the end, the innings would have been in dire straits. Even with Steyn’s cameo, the Sunrisers ended up with a highly disappointing total.

One of the main reasons behind Titans’ victory was without doubt the all-round effort of David Wiese. He picked up the key wickets of openers and Vihari to stem the flow of runs for Sunrisers after their good start. Then, with the bat, he made sure that Sunrisers’ bowlers did not have any sniff of a chance at victory. The opener’s innings was solid and his partnership with Jacques Rudolph pretty much sealed the match for Titans. Apart from their batting and bowling, their fielding earlier in the day was also spectacular, which was another reason they always stayed ahead.