The Chennai Super Kings made a mockery of the 179 run target given to them as they romped over the Kings XI Punjab in the 18th match of IPL 2020. Shane Watson and Faf du Plessis struck impressive 80’s as they won the match by 10 wickets, with more than two overs to spare.

CSK were chasing a competitive total of 179 and given their three consecutive losses and an under-firing Watson, not many would have backed CSK to complete the chase, especially the way they did. Perhaps that’s the thing about big players, they know when a good knock is just around the corner. Watson began in his typical fashion as he smashed two consecutive fours off Cotterell in the first over of the chase. That gave signs of what was to follow. Faf du Plessis, who survived a close LBW call from Harpreet Brar, bludgeoned 4 fours in Jordan’s first over as CSK reached 60 at the end of powerplay. 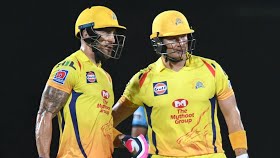 Watson was unrelenting against spin, as Brar and Bishnoi were expensive and with little help from the pitch, Rahul was looking clueless with his options. The fact that Jordan went for 30 from his first two overs didn’t help their cause as the required rate kept on declining steadily. CSK reached 150-0 at the end of 15 overs, as both the openers helped themselves to fifties. Punjab needed to do something out of the box to win from there on, and Bishnoi tried his best with a new tactic as he tried to mimic Rahul Chahar by running across the umpire in his bowling style. That did help as only six came off the 16th, but it was too little too late. CSK brought an end to the chase with du Plessis hitting a six and a four off Shami to win the crucial encounter.

Earlier in the match, Punjab openers KL Rahul and Mayank Agarwal got them off to another good start. CSK bowlers Deepak Chahar and Sam Curran didn’t find much assistance from the pitch and with a boundary per over on an average, Punjab raced to 46-0 at the end of powerplay. Agarwal was looking more aggressive of the two and tried to take on Chawla as soon as he came to bowl, but found Sam Curran at deep mid wicket instead.

Mandeep Singh, playing his first match of the season, came to bat at number three and started to impress everyone straight away. With two sixes off Chawla inside one over, it seemed to be Mandeep’s night, only not to be as he was caught by Rayudu off Jadeja in the very next over. Pooran joined the skipper and showed his intentions by smoking Jadeja for a four and a six at the end of the 14th over. Rahul, who was playing a sedate knock thus far, also joined in the act by scoring 14 off Thakur’s 3 balls in the next over. At 33 off 16 balls, Pooran was looking dangerous, but his innings was cut short by Thakur as Jadeja took a wonderful skier. Punjab were dealt with a body blow as they lost their skipper the very next ball for 63, with Dhoni taking his 100th IPL catch. Sarfaraz and Maxwell played and missed, as only 26 came off the last three overs.