South Africa are confident Quinton de Kock will be fit for the 2015 World Cup.

AB de Villiers will lead the side with Hashim Amla his vice-captain. 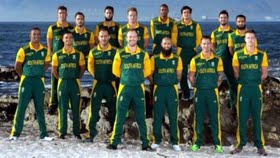