Rajkot ODI: Rishabh Pant ruled out with concussion as India aim to bounce back

Having been handed a 10-wicket pasting in the first ODI at Wankhede Stadium in Mumbai, India faces a do-or-die encounter when they take on Australia

Having been handed a 10-wicket pasting in the first ODI at Wankhede Stadium in Mumbai, India faces a do-or-die encounter when they take on Australia in the second match of the three-game series at Rajkot. India had a forgettable outing at Mumbai, putting up just 255 on the board batting first, and then failing to pick up a single wicket as Aussie openers Aaron Finch and David Warner slammed hundreds.

India won’t have the services of wicket-keeper Rishabh Pant in the second ODI. The left-hander, who was struck on the helmet by a Pat Cummins bouncer in the first ODI, has been ruled out with a concussion. KL Rahul, who took the wicket-keeping duties in the first game, is likely to continue in the role at Rajkot as well.

The batting positions remain a matter of debate after Virat Kohli’s decision to come down at number four, to accommodate Rahul at three at Mumbai, did not work. While Kohli admitted to post the game that the move will need a rethink in view of the results, he also stated that he is allowed to experiment a little and fail. 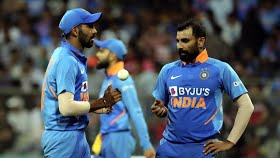 In all probability, Kohli should return to his customary number three position, with Rahul moving down to number four. Pant’s absence will mean a spot for either Kedar Jadhav or Manish Pandey in the middle order. With his ability to bowl a little, Jadhav might get the nod ahead of Pandey.

Although India’s bowlers failed to pick up a single wicket at Mumbai, not too many changes are expected in that department. If at all, fast bowler Navdeep Saini could come in at the expense of Shardul Thakur. Saini had impressed with his pace in the T20Is against Sri Lanka, and India would want to test him out against the stronger Aussie outfit.

There shouldn’t be any panic in the Indian camp as far as the bowling is concerned as everyone from Jasprit Bumrah to Mohammed Shami and Kuldeep Yadav to Ravindra Jadeja is a proven performer. Of course, what physiological impact, if any, the Wankhede pounding has on them remains to be seen.

Australia isn’t expected to make any changes in their line up. While Finch and Warner were smashing with the bat, in-form Marnus Labuschagne will be keen to make his first impressions in the ODI format. The visitors would be most pleased with the manner in which their bowlers combined to restrict India after the hosts got off to a confident start.