The Irani Cup match scheduled to take place at the Sawai Mansingh Stadium in Jaipur on the 21 of this month has been shifted from the venue.

The Irani Cup match scheduled to take place at the Sawai Mansingh Stadium in Jaipur on the 21 of this month has been shifted from the venue. The BCCI Pitch and Grounds Committee Chairman Venkat Sundaram has stated that the pitch conditions for the annual fixture are far from ideal because of heavy rains in the recent days. The Rajasthan Cricket Association has run out of time to prepare the pitch because of the rains which has forced the BCCI to shift the venue somewhere else. 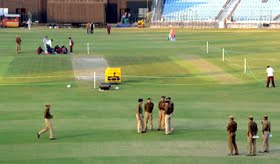 The BCCI Pitch and Grounds Committee Venkat Sundaram has been quoted in various newspapers saying that: "It was saddening to note that the Sawai Man Singh stadium ground, which was voted the best in the IPL, has deteriorated. There was a lot of moisture in the pitch and the outfield too was in a bad shape.

With the Met department forecasting more showers in coming days it was not worth taking risks for such an important match like the Irani Trophy tie. I will have to intimate the BCCI that the match should be shifted to some alternative venue.”

The BCCI is yet to decide on the venue for this annual fixture which has been a curtain raiser to the Indian Domestic Season. The Irani Trophy is a one-off 5-day match played by the previous season’s Ranji Trophy Champions and a Rest of India team. This time, the Irani Trophy will see Rajasthan, possibly led by India discard Hrishikesh Kanitkar, play against Rest of India.