Indian batsman Hanuma Vihari, who was the standout performer for the team in the Test series against West Indies, has credited coach Ravi Shastri for his success.

Indian batsman Hanuma Vihari, who was the standout performer for the team in the Test series against West Indies, has credited coach Ravi Shastri for his success. Vihari revealed that Shastri told him to flex his knees a little bit, and that made a lot of difference.

Having narrowly missed out on a hundred in the first Test, Vihari came up with a man of the match winning performance in the second Test scoring 111 and 53 not out.

Speaking about his success, Vihari told fielding coach R Sridhar in a conversation which was posted on BCCI website, “He (Shastri) was talking about flexing my knees a little bit, I was a little upright in the first innings, so flexing my knees meant I could move my foot both on front and back foot." 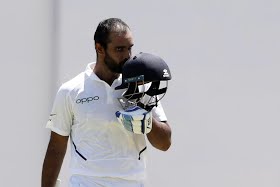 Vihari, who was somewhat controversially chosen over Rohit Sharma for the middle-order slot, proved his worth ending up as India's highest run-getter with 289 runs from two Tests.

Praising Shastri further, Vihari added, “It worked out very well and a lot of credit should go to him. I relish batting under pressure because that is the challenge you have to accept as a batsman and these situations brings the best out of me."

The middle-order bat added that having the experienced Ajinkya Rahane at the other end helped a lot. “I feel I try to focus on what the situation is, and have a certain game plan and I was fortunate enough to have good partnerships with Jinx. He batted beautifully as well," Vihari was further quoted as saying on the BCCI website.

Judging his performance, Indian skipper Virat Kohli termed him as the biggest find of the tour. Vihari stated that the stint the A team in the Caribbean proved to be a big plus for him.

“I was in really good space. I have been in Caribbean for last two months, I have been practicing and playing matches on this wicket. So I was really confident and I think I played well in the practice match and it gave me that extra boost. I was looking forward to this series and I am happy it went well," he explained.

Vihari has only played six Tests but has 6,000 first-class runs and that matters a lot, he admits.