Test captain Misbah-ul-Haq and former skipper Shahid Afridi have said they do not agree with limited-overs skipper Sarfaraz Ahmad's claims that India was scared of playing against Pakistan,

Test captain Misbah-ul-Haq and former skipper Shahid Afridi have said they do not agree with limited-overs skipper Sarfaraz Ahmad's claims that India was scared of playing against Pakistan, and hence there have been no bilateral ties.

"Sarfaraz has his own views but I don't think he said they were scared directly. To me it is simple, everyone knows the reasons for India not playing against Pakistan. It is all political and has nothing to do with cricket," Misbah said while speaking at the ICC Champions Trophy unveiling at the national stadium. 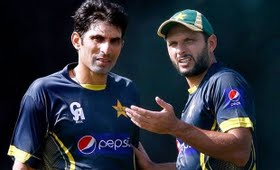 Afridi added, "If there is no bilateral cricket being played it is because of the Indian government. I don't think the Indian players do not want to play against us.”

The cricketer who retired from international cricket last month added, "When we went there last year the Indian people were happy to see us play there," he said.

Misbah meanwhile believed that Pakistan had a very good chance of beating India in the Champions Trophy as he things Sarfaraz is a smart captain. "He has done a good job and I think our team is a blend of experience and youth. We are now best placed to win the June 4 encounter against India and also do well in the Champions Trophy," Misbah explained.