aving been easily beaten in the three-match Test series, Sri Lanka will be hoping for a reversal in fortunes as they face England in the first one-dayer at Trent Bridge on Tuesday. Although Sri Lanka have always been a much better one-day side as compared to Tests

Having been easily beaten in the three-match Test series, Sri Lanka will be hoping for a reversal in fortunes as they face England in the first one-dayer at Trent Bridge on Tuesday. Although Sri Lanka have always been a much better one-day side as compared to Tests, of late their performance in that format has also fallen, again due to the retirement of their legends. On the other hand, England have recovered well over the last year post the World Cup debacle. While they made it to the World T20 final, their one-day form remains somewhat inconsistent. They have won as many matches as they have lost.

England will undoubtedly go into the one-dayers on a high, and apart from James Anderson, most of the other heroes from the Test win remain part of the one-day squad as well. A big change would obviously be Eoin Morgan coming in to lead the squad as the format changes. Morgan has not had it good with the bat in recent times, so he will be raring for the challenge. The injury to Ben Stokes is a definite cause of concern for the hosts. However, in case he is unfit, there is every possibility that they will stick to Chris Woakes in one-day format as well. The pacer was impressive in the Tests, and will look to continue his good run.

There will be a few changes for sure with the change in format. Jos Buttler may have been superseded by Jonny Bairstow in the Tests, but in the ODIs, England cannot afford to leave out Buttler. At the same time, Bairstow is in way too great form to be left out of the playing eleven. There is a high possibility that the English think-tank will utilise him as a specialist batsman in the middle order. Also, Jason Roy, who has established himself nicely at the top of the order, will join the in-form Alex Hales in opening the innings. James Vince also comes into the squad. In the bowling Liam Plunkett and Adil Rashid are notable additions.

Sri Lanka go into the series having thrashed Ireland in a two-match contest. And, while that would definitely give them a sense on confidence, the Lankans wouldn't be relying on the sense of false pride. They would definitely be keen to build on the gains from the Ireland bashing though. Kusal Perera scored a memorable ton in the second match of that series while Seekkuge Prasanna and Danushka Gunathilaka chipped in with crucial contributions as well. While Sri Lanka will want these men to continue with their good work, they would also want the others to rise to the challenge, which is where they failed in the Tests. 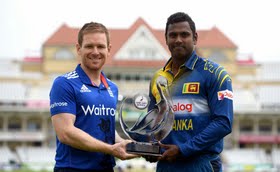 A lot will be expected skipper Angelo Mathews with both bat and ball, as always has been the case. Among the others Kusal Mendis played a couple of good knocks in the Tests, and will be looking to carry on the good work. Dinesh Chandimal is another key name in the batting department. The recalled Farveez Maharoof will be keen to leave an impression with his all-round skills. In the bowling, Sri Lanka have been dealt a big blow with Shaminda Eranga being banned by ICC. They will depend on the likes of Suranga Lakmal, Dasun Shanaka and Suraj Randiv to deliver.