AUS vs IND 5th ODI: India had been promising it all summer. And, at Sydney, they finally translated the promise into performance.

India had been promising it all summer. And, at Sydney, they finally translated the promise into performance. Yet again, India made hard work of a 330 plus target. At one point in the game, they were cruising, just like in the chase at Canberra. Once again, MS Dhoni's waning skills with the bat put India in trouble as he struggled to get the big hits at a time when India desperately needed them. But, Manish Pandey, who was in the eleven only because Ajinkya Rahane was unavailable due to injury, played a mature knock that defied his international experience. His cool hundred coupled with a 99 from Rohit Sharma and 78 from Shikhar Dhawan was enough to take India home. 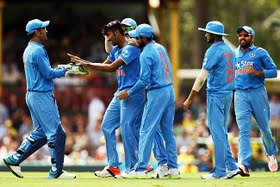 Once Australia put up 330 batting first, their chances of a 5-0 triumph had brightened even further. Although India had posted a similar score in the previous match chasing, it was their Canberra collapse that people will always remember from that defeat. India could have won that easily, but did not. And so, even when India were in a good position chasing again, Australia would have always believed that they were only a wicket away from engineering an Indian collapse. Briefly, it seemed to be the case again, as Australia fought back in the last few overs. But, Pandey, under pressure, kept his nerves, and took India through.

Considering the manner in which India fell apart at Canberra, it was commendable that Rohit and Dhawan were ready to fight it out once more. They might as well have thrown in the towel, and it could easily having been put down to the lack of motivation after the Canberra debacle. But, the openers came out with an intent to win. Dhawan and Rohit have often taken turns to attack, and this time it was Dhawan who came out all guns blazing even as Rohit was content rotating the strike. The openers added over a hundred at less than a run a ball before Dhawan was brilliantly caught at deep point.

For a change, Virat Kohli fell in single figures, but Pandey and Rohit ensured that India remained in the hunt with another breezy and, more importantly, a sizeable partnership. While Rohit was his usual self, taking his time before opening up, Pandey came up with some crisp drives, and got value for shots at the SCG. All seemed to be going well for India until Rohit was caught behind for 99. Dhoni came in and India immediately lost momentum. They went into the last over needing 13. Dhoni managed a six, but perished next ball. Pandey however kept his cool, and guided one past the keeper for his hundred. It made the result a formality.

Earlier, bowling first, India made an impression for the first time in the series. Ishant Sharma foxed Aaron Finch into leaving one that came in. Steven Smith looked fluent against the usual pacers, but was troubled by debutant Jasprit Bumrah, and eventually became the debutant's maiden ODI scalp. George Bailey registered a rare failure against India, and Shaun Marsh too failed for a change. But, David Warner achieved what he missed out at Canberra, a century. He was joined in by Mitchell Marsh, who combined brute force and good placement to bring up his maiden hundred. Australia however managed only seven in their last two overs. That coupled with some dropped catches aided India in preventing a whitewash.