Twenty20 once again proved to be an unpredictable game as England cruising along at 113 for 3 in the 16th over chasing a modest target of 145 went onto lose the match by 8 runs! Umar Gul and Mohammad Hafeez with their economical bowling and key wickets helped Pakistan to a shock win in the opening T20I at the Dubai International Cricket Stadium.

England were off to a flying start with the in-form Kevin Pietersen scoring 33 from 21 balls with 4 fours and a six. However, he got out to a brilliant catch from Asad Shafiq just infront of the deep mid wicket boundary in a pull shot that could have so easily flown away for a six. England slowed down after Pietersen’s wicket in the 6th over with Mohammad Hafeez bowling on a tight leash. 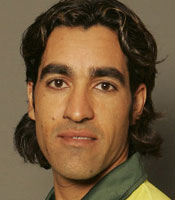 Hafeez picked up 2 for 18 in his four overs to leave England under pressure at 80 for 3 in 12.2 overs. England bounced back though thanks to a smooth innings from Ravi Bopara. The match slowly got back in the balance when Ravi Bopara (39 from 32 balls with 2 fours and a six) got bowled round his legs by an Umar Gul yorker in the 16th over. England needed 32 more runs to win from 25 balls at this stage.

Saeed Ajmal and Umar Gul bowled really well to leave England out of the match with as many as 18 runs to win from the final over. Left arm pacer Junaid Khan held his nerve to ensure that he didn’t go for a boundary or a six and England had to settle at 136 for 6 with a specialist batsman in Jonny Bairstow (22* from 21 balls) unable to take them home.

Fast bowler Umar Gul for his great figures of 4-1-18-3 got the Man of the Match award. Umar Gul also picked up the crucial wickets of Samit Patel (lbw after looking to flick across the line to a yorker) and Jos Butler (caught at short fine leg attempting a paddle scoop).

Highlights of the Pakistan Innings : Pakistan have been restricted to 144 for 6 after being put into bat first at the Dubai International Cricket Stadium. England was right on top when they had Pakistan at 73 for 5 in the 11th over but lost the plot conceding a 71-run partnership between Skipper Misbah-ul-Haq and Shoaib Malik.

It was a flying start for Pakistan as newcomer Awais Zia played his shots freely to score a cameo of 18 from 12 balls to take his side to 32 for 1 in 2.5 overs. Zia got out spooning a slower one to mid off. Pakistan lost the momentum though after his dismissal and it was Graeme Swann with a brilliant spell of 3 for 13 including a maiden in his 4 overs pulling down the momentum completely.

Swann’s victims were Mohammad Hafeez top edging a slog sweep to deep mid wicket, Shahid Afridi flicking one into the hands of short mid wicket and Umar Akmal holing out to long off. In the second half, England failed to make any further inroads and let the pair of Misbah-ul-Haq (26* from 26 balls with 1 four and 1 six) and Shoaib Malik (39 from 33 balls with 4 fours and a six) off the hook.

Toss and Teams : England under the leadership of fast bowler Stuart Broad have won the toss and elected to field first in the 1st Twenty20 International at the Dubai International Cricket Stadium.

Ravi Bopara has recovered from his back spasms to make it to the playing XI. Alastair Cook who has been asked to stay on as his injury cover will sit out from the match.

Here are the two playing XIs for this match :