CSK vs RCB IPL 8 Qualifier 2 Match report: Chennai Super Kings, their two most experience batsmen Mike Hussey and MS Dhoni made sure that their team will cross the line of 140 runs against Royal Challengers Bangalore in the Qualifier 2 of the eighth season of Indian Premier League at JSCA Stadium, Ranchi. 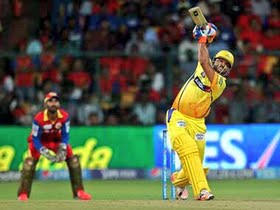 Big players should rise on occasions. Exactly what happened with Chennai Super Kings, their two most experience batsmen Mike Hussey and MS Dhoni made sure that their team will cross the line of 140 runs against Royal Challengers Bangalore in the Qualifier 2 of the eighth season of Indian Premier League at JSCA Stadium, Ranchi. Royal Challengers were lagging in the game right from the start of the game. They lost the toss and were asked to bat on a rank turner and due were expected late in evening. MS Dhoni introduced R Ashwin early in the inning against Chris Gayle to control his aggression and that’s what happened. Gayle had no clue against the turning deliveries of Ashwin. All Gayle could manage was to leave those balls to go to Dhoni behind the stumps or defend back to the bowler. The situation became adverse when Ashish Nehra took two wickets in the fifth over. Kohli and de Villiers both were dismissed in that same over. Losing Mandeep Singh in the eighth over, Bangalore was reduced to 36/3 then. Karthik played positively and rotated the strike well with Gayle. Gayle hit Raina two sixes on the first two balls of the 14th over but was dismissed on the third delivery in trying to play too many shots. Gayle waited for the two left arm Chennai’s spinners to come but Dhoni delayed their introduction that’s why Gayle was forced to take his chance against Raina. Sarfraz Khan played a little cameo of 31 runs off 21 balls which helped Bangalore to reach 139 in their 20 overs quota.

Ashish Nehra was the pick of the bowler for the Chennai Super Kings today as he claimed three important wickets. Ashwin bowled well in powerplays and was rewarded with a wicket of Mandeep Singh.

Chasing a modest total of 140 runs, Chennai lost Smith when the score was just 21. Hussey and de Plessis added 40 runs for the second wicket then Chahal provided a double breakthrough for the Bangalore. Raina got out on duck and put Chennai in deep trouble. Hussey hit three boundaries and two sixes in his inning of 56 runs off 46 balls. Hussey mishit a raising delivery and was caught by Harshal Patel off Wiese. Negi 12 off 6 balls was the most vital inning in the context of this game. Dhoni struggled to score freely but still he was good enough for rescuing Chennai and took them home. Dhoni got out when the score was leveled. Ashwin scored the winning run and completed the formalities with one ball to go.

Chennai Super Kings will take on Mumbai Indians now on Sunday in Eden Garden, Kolkata now. This will be the third time that these two teams will be taking on each other in IPL final. Both have won one final against each other. We can expect an interesting contest between these two teams.

Man of the Match: Ashish Nehra