In an inconsequential ICC World T20 Group A encounter at Dharamsala, Netherlands overcame Ireland by 12 runs

In an inconsequential ICC World T20 Group A encounter at Dharamsala, Netherlands overcame Ireland by 12 runs. In a match, where the majority of overs were lost to rain, Netherlands batted first and reached an impressive 59 for 5. Stephan Myburgh top-scored for Netherlands with 27. In response, Ireland were restricted to 47 for 7. Paul van Meekeren was the standout performer with 4 for 11. He claimed the big wickets of Paul Stirling, Kevin O'Brien and Gary Wilson to put paid to Ireland's hopes of a consolation victory. 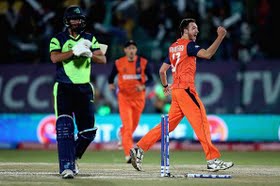 Ireland's chase got off to a poor start as skipper William Porterfield, looking for a big one, top edged one straight in the air. Ireland were never in the game after that as van Meekeren took over. As expected, Ireland promoted Kevin up the order. But, he was back in the hut for a duck. Kevin pulled one towards deep midwicket, where Pieter Seelaar came in, took a brilliant diving catch, just before the ball could hit the ground. Very next delivery, Stirling fell, giving an easy catch to short third man. The procession of wickets continued as a key member of the chase, Wilson, fell cheaply. Rest was mere formality.

Earlier, Netherlands were given an impressive start by Myburgh. He began by smashing Tim Murtagh through point-cover and the long-off boundary. At the other end, George Dockrell took out Tom Cooper for a duck, and Roelef van der Merwe for 2, as Ireland hit back. Ireland kept picking up wickets, but the boundaries also kept coming. In the last over, Myburgh got an four by thick edging one through slip, and then driving one over cover. He was run out in the same over, but in a 6-over contest, his knock was significant. 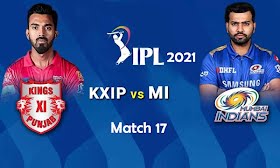