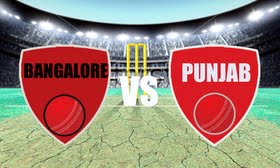 Preview:They will have to be smarter with their strategies given the tremendous form shown by the Punjab duo of Rahul and Karun Nair, both of whom will be playing on their home territory. A 22 ball 12 from Yuvraj Singh will no doubt have his fans worried and one will eagerly look forward to watching Virat Kohli use of Washington Sundar and Yuzvendra Chahal against the left hander.

The biggest positive for the Bangalore bowling attack from their last game would be the form of Umesh Yadav. Not only was he hostile, but also accurate. Bangalore chances of ending their trophy drought will depend on their bowlers defending totals at home more than anything else.

Punjab, who are themselves looking for a breakthrough campaign, could not have hoped for a better start to the tournament. Ravichandran Ashwin was impressive on captaincy debut and was not shy of accepting the fact that he had nerves before the start of the game. He rotated his bowlers well and himself bowled a miserly spell, going for less than six an over.

During his 16-ball knock of 51, KL Rahul became the first batsman to reach his fifty within the first three overs of the innings in T20s.

Punjab have chased down three totals of more than 200 in the IPL, the most by any team.

Ashwin has not dismissed Kohli in the 14 matches between them. Kohli has managed to score 127 runs off 97 balls from Ashwin.