Philander out, Kallis breaks down midway as Proteas hit by double injury blow

South Africa aiming to go 1-0 up at Adelaide have been hit by a double injury blow. The visitors have lost their match-winning pace bowler Vernon Philander this morning through a stiff lower back.

South Africa aiming to go 1-0 up at Adelaide have been hit by a double injury blow. The visitors have lost their match-winning pace bowler Vernon Philander this morning through a stiff lower back. Philander was eased out of the playing XI and the Proteas brought in leg spinner Imran Tahir. Rory Kleinveldt who made a poor debut in the first Test at Brisbane keeps his place despite bowling plenty of noballs and loose deliveries.

South Africa Team Manager, Dr Mohammed Moosajee has been quoted to have said in the media that: "Vernon woke up complaining about lower back stiffness, he progressively got worse and didn't respond to the treatment from our physiotherapist, Brandon Jackson. He will go for an MRI scan as soon as possible to give us a clearer indication of the symptom." 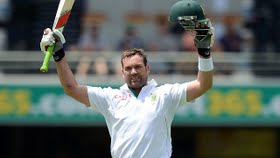 The South Africans made two changes to their line-up. Faf du Plessis is making his Test Debut by taking the place of the injured JP Duminy. Leggie Imran Tahir was drafted in for the injured Philander.

There was another injury blow to the Proteas midway during the morning session on Day 1 at Adelaide with all-rounder Jacques Kallis breaking down with a hamstring injury. Kallis bowling his 4th over had already picked up two wickets removing first Test centurion Ed Cowan and former Skipper Ricky Ponting with superb yorkers. While Kallis’ bowling may not be missed by the Proteas, it is his batting at no.4 that will keep them worried.