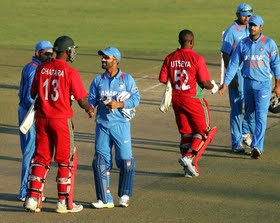 Brendan Taylor: "Good side like them, if you give them chances they make you pay. That partnership really killed us. Our top-order batters and senior players have to put our hand up and accept responsibility. We were too slow in the field, and there are some penalties in place for that."

Virat Kohli: "At 50 for 4, it wasn't looking good. Few mistakes from the batsmen, few tricky calls. There's two sides of being lucky, you can think that I'm not batting well, or you think today is my day, credit to Dhawan for the way he played. A pity Karthik couldn't make his century, Unadkat has good hieght, he hits good lengths, change of pace as well. We're playing some really good cricket, we've got a new side out there to prove themselves, today the guys responded beautifully."

Man of the Match isShikhar Dhawan: "Actually, it was one of my lucky days. I was playing well in earlier innings too, but I was getting out. The wickets wasn't easy to bat on. Me and Karthik just thought we should play on the merit of the ball."

Winters in Zimbabwe are cold and dry and usually the pitches reflect this, favouring spin over seam and playing a little on the slow side.

On Wednesday, Kohli became the quickest to 15 ODI hundreds; it took him only 109 innings, breaking the previous record held by Saeed Anwar (143 innings).

In the last 10 years, Zimbabwe's opening partnership in ODIs against India yields 43.66 runs on average. The next highest against a Test nation is 28.60 against England.