South Africa pulled off an incredible 3-run win in the third and final T20I against hosts New Zealand at the Eden Park in Auckland. Chasing a modest target of 166 from 20 overs, the hosts were cruising along at 142 for 4 in 15.2 overs before dramatically going down.

The Kiwis needed just the 7 runs to win from the last over of the match which was given to the tall fast bowler Marchant de Lange. However, the hosts made a mess of it despite having five wickets in hand at that stage! In the end, they made it into a difficult equation of six to win from the final ball. Yet there was hope as Marchant de Lange overstepped to bowl a noball and concede a free hit with the Kiwis needing four to win from 1 ball. The fast bowler held his nerve to beat the bat of Tim Southee to bowl the Proteas to a close win. 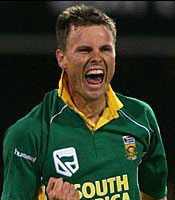 Earlier in the match, the Kiwis won the toss and put South Africa to bat first. The visitors were restricted to 165 for 7 with the top score coming in from JP Duminy (38 from 20 balls with 2 fours and 2 sixes). Swing bowler Tim Southee did well for the hosts with figures of 4-0-22-2.

The Man of the Match award went to Johan Botha who took 2 for 20 in 4 overs which also included the crucial wicket of Jesse Ryder. South Africa with this 3-run victory have clinched the 3-match series 2-1.