Following a roaring series against India, it seemed like Ricky Ponting’s career had come on track for a brief period. However, failures in the Tests against South Africa, and his career seems near the end again.

Following a roaring series against India, it seemed like Ricky Ponting’s career had come on track for a brief period. However, failures in the Tests against South Africa, and his career seems near the end again. He scored a duck in the only innings he featured in at Brisbane and registered scores of 4 and 16 at the Adelaide Oval. The worrying aspect from the Australian point of view is that the South African pacers were successful in breaching the former Aussie skipper’s defence in both innings. His manner of dismissal was rather ungainly. 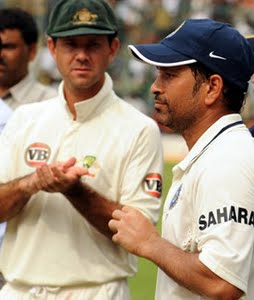 Another failure and Ponting’s career could be over. One might wonder how things are going wrong all over again for the Australian legend again following the massive scores he registered against India. The fact of the matter however is that the Indian attack was not strong enough to trouble Ponting. In comparison, the South African pacers are much better, at least good enough to get the betterof Ponting’s wobbly defence even as they have struggled against the younger players in the Aussie batting line up. Even though Ponting has only failed in a few innings, he is at such a stage of his career that every poor knock will move him towards the exit door.

Ponting has expressed hopes of playing the upcoming Ashes. At the same time, he has also admitted that he is aware every failure will bring a new player closer to occupying his position in the team. Obviously, the former Aussie skipper must be practicing as hard as anyone else in the team. However, there are times when the mind says yes, but the body says no. Something similar seems to be happening in the case of Ponting, unless of course he can prove critics wrong if he gets another opportunity.

The veteran Aussie’s ODI career ended abruptly following a number of low scores in the tri-series involving India and Sri Lanka. To avoid the ignominy of being dropped, it would be better if Ponting himself decides to hang up his boots. Agreed, retirement is a personal decision. Still, those who have seen Ponting struggle in the ongoing games against South Africa would agree that the man is well past his prime. Like fellow great Sachin Tendulkar, Ponting also seems to be dragging his career along. It would be sad to see two legends going out on a low.