Zimbabwe recorded their first victory in last 10 completed matches with an impressive seven-wicket triumph over New Zealand in the first ODI of three-match series on Sunday.

Zimbabwe recorded their first victory in last 10 completed matches with an impressive seven-wicket triumph over New Zealand in the first ODI of three-match series on Sunday. The hosts chased down the target of 304 runs to win with an over to spare at Harare Sports Club in Zimbabwe.

When New Zealand set the target of 304, it looked like it would be another regulation loss for Zimbabwe. But Zimbabwe’s batsmen fought successfully and it paid off too. First, Hamilton Masakadza laid the foundation with 84, and then Craig Ervine took the responsibility of chase and made sure that Zimbabwe would cross the line this time with his unbeaten 130 off 108 balls. What Zimbabwe had done better in this match was they didn’t lose too many wickets early in the inning which helped them when they 34 off three overs and they had Craig Ervine still out there. When 34 were needed off 18, Ervine cracked Matt Henry for a boundary and a six to bring the margin down to 16 off 12. James Neesham was preferred over Mitchell McClenaghan for the penultimate over. But, Neesham conceded a six off his last delivery which turned the game in Zimbabwe’s favour.

Zimbabwe had partnerships right from the start of the inning. Chamu Chibhabha and Hamilton Masakadza added 74 runs for the first wicket. Chibhabha was out for 42 off 48 balls when Nathan McCullum delivery turned sharply to elude his drive. The wicket didn’t stop Zimbabwe from playing positive. Masakadza and Ervine have all the answers of the spinners and they played off spinner McCullum and debutant Ish Sodhi very well. Masakadza-Ervine stand had produced 120 off 121 balls before Nathan McCullum struck Mazakadza for 84 off 99 deliveries. After Masakadza dismissal, it seemed that it would open the gates for visitors but Ervine-Chigumbura added another 66 runs for the third wicket. Chigumbura was McCullum third scalp but Ervine was as cool as ice and he helped his team to chase the score successfully. 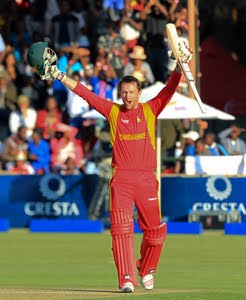 Earlier in the day, New Zealand were sent in to bat first. They lost couple of early wickets but Taylor and Williamson partnership of 137 runs for the third wicket helped visitors to get past 300. Ross Taylor completed a well brilliant century but his partner Williamson missed it by three runs. Grant Elliott played a little cameo of 43 runs off 32 balls which include three boundaries and a six. Taylor fifty came off 89 balls with only two fours in it but he ended up hitting five boundaries and three sixes in his unbeaten 112-run inning.

The two team next meet is on Tuesday in Harare, with the final fixture in the three-match series then taking place on Friday at the same venue.

Man of the Match: Craig Ervine