Having clinched the second T20 at Mohali to go one up in the series, hosts India will look to further improve their beginning of the new home season

Having clinched the second T20 at Mohali to go one up in the series, hosts India will look to further improve their beginning of the new home season, by claiming the series 2-0 in the final T20 to be played at the Chinnaswamy Stadium in Bengaluru on Sunday.

The washout at Dharamshala means South Africa has no chance of winning the series but they can still end the T20 on even terms if they manage to put it past India on Sunday. Quinton de Kock and co showed glimpses of their capability at Mohali, but it wasn’t to be enough against a strong Indian team.

There were some very good performances by India at Mohali, led from the front by Virat Kohli, who again shone in a chase with unbeaten match-winning innings. More significantly, Shikhar Dhawan got some runs with an impressive knock of 40 before being miraculously caught by David Miller. 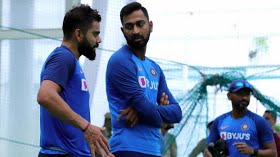 Deepak Chahar also excelled with the ball, ensuring South Africa could not post a big total after a solid foundation was laid by the top order. There might be one chance in the bowling department though. Rookie leggie Rahul Chahar may come in for Washington Sundar, who has not been among the wickets of late.

There could be some tinkering in the batting department as well. Rishabh Pant came up with yet another failure at number four so there is a high probability that he might be demoted and the in-form Shreyas Iyer might move up to number four. Further, Krunal Pandya delivered just one over in the last match so India could try out Manish Pandey instead, particularly considering Rahul Chahar can bat as well.

South Africa had their chances at Mohali but let them slip. Skipper Quinton de Kock was highly impressive at the start with a half-century. However, there was no momentum thereafter. Temba Bavuma got stuck and ended up making 49 from 43, thus undoing some of the good work.

With no Faf du Plessis and AB de Villiers around, it would be imperative for David Miller to pick up his game with the bat. His fielding remains an asset as evident from the spectacular grab of Dhawan. In the bowling department, it will be again up to Kagiso Rabada and Tabraiz Shamsi to do the major damage.