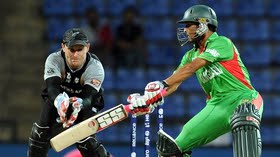 Pitch report :The Mirpur pitch wasn't easy to bat on, according to Mushfiqur Rahim. Corey Anderson, too, noticed that the track had a bit of spice at the start of the game, and it will encourage the pace bowlers. Although it rained on Tuesday, weather forecasts suggest a clear day for the second ODI.

Bangladesh's 43-run win in the first ODI against New Zealand was an important boost for a side that, prior to the series opener, had only two wins in six games this year. The win also strengthened their ODI record against New Zealand, which now stands at five successive wins, dating back to their 4-0 win three years ago. New Zealand, meanwhile, have been served a timely reminder that they are yet to win a match on this tour. The visitors drew the Test series 0-0, but hardly looked convincing enough to push for victory. In Mirpur, on Tuesday, they ended up conceding a game they looked like winning at several points. New Zealand's bowlers didn't make the most of the start given by Tim Southee and while they did make a comeback of sorts in the last 10 overs, they were still faced with a target of 266. Their chase began poorly with the opening pair of Anton Devcich and Hamish Rutherford - the fifth in 13 games this year - falling to casual dismissals. They fought back after the rain break but Rubel Hossain's brilliant spell of bowling under pressure turned out to be their undoing.

Corey Anderson is the only batsman to feature in both hat-tricks on this tour. In the Tests, he was dismissed by Sohag Gazi, while in the ODIs, he was Rubel's first wicket