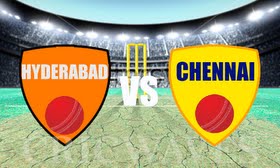 The Hyderabad bowling, which has been hailed to be the best in this season, had to bow down to the mighty Gayle and will have to deal with an in-form Shane Watson who followed Gayle with the second hundred of the season. The defeat would have come as a wake-up call for the Hyderabad and would definitely make them hungry to bounce back better.
The fact that even Rashid Khan went for 55 runs off his four overs only goes on to show the unpredictable nature of T20 cricket. They will be hoping for Dhawan to be fit for this fixture as his injury hit their batting performance hard. They will also need to find a way to bat Shakib al Hasan higher up the order in order to maximize his potential with the bat.
Chennai had the perfect game against Rajasthan and will be looking for a repeat of the same performance. What they will be aware of is the fact that the match will not be a walkover. Chennai have had crucial contributions with the bat in each of the matches and will be pleased to see Suresh Raina finally among the runs. His explosive hitting is what makes them an even more dangerous side.

The Hyderabad stadium has seen a six hit every 51 balls so far this season, making it the hardest six hitting wicket!
Shane Watson became the first player to hit IPL hundreds for and against the same team in the IPL. He had scored 101 in IPL 2013 for Rajasthan against Chennai, and followed that up with 106 against Rajasthan, playing for Chennai the other night
Hyderabad have won eight of the nine matches at their home since last season with only loss coming against Punai.