Sri Lanka thrashed India by 161 runs in Match 3 of the Celkon Mobile Cup at Jamaica. None of the Indian batsmen threatened to chase down the huge target of 349.

Sri Lanka thrashed India by 161 runs in Match 3 of the Celkon Mobile Cup at Jamaica. None of the Indian batsmen threatened to chase down the huge target of 349. India was bowled out for just 187 in 44.5 overs with Rangana Herath doing the damage taking 3 for 37.

India started off slowly in their run chase and were given their first casualty in the 5th over with Rohit Sharma flicking Kulasekara into the hands of short mid wicket. Shikhar Dhawan (24 from 42 balls) looked promising until he charged down the track and holed out to deep mid wicket off Herath leaving India at 52 for 2 in the 15th over. Team India was rocked by two successive wickets after that which reduced the score to 65 for 4 in the 19th over.

Skipper Virat Kohli was dismissed by his counterpart Mathews with the former hooking him into the hands of long leg. Murali Vijay, who came in at no.3, collected 30 from 46 balls before he was bowled through the gate by a full length inswinger from Malinga. Defeat was certain for India now and in the space of about five overs, the two more recognized batsmen – Dinesh Karthik and Suresh Raina departed to the pavilion. Karthik (22 from 41 balls) was stumped after missing a carrom ball from Herath having stepped out while Raina (33 from 33 balls) ran himself out trying for a difficult third run.

India headed towards a massive defeat at 142 for 6 in the 34th over and a few fireworks from Ravindra Jadeja could only delay the inevitable. Jadeja was stranded on 49* from 62 balls with last man Umesh Yadav getting bowled by an off cutter from Malinga. All the five Lankan bowlers used were amongst the wickets and bowled on a tight leash. 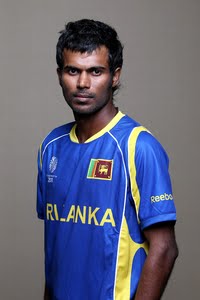 Earlier, a double century opening stand from Upul Tharanga and Mahela Jayawardene completely demoralized Team India at the Sabina Park in Kingston, Jamaica. Sri Lanka piled up 348 for the loss of just one wicket with Upul Tharanga scoring a career best of 174 which obviously gave him the Man of the Match award.

India struggled to make any inroads with the new balls under overcast conditions. Mahela Jayawardene and Upul Tharanga kept things steady and went along nicely without taking many risks. It was only in the 39th over that India could finally taste success when Mahela Jayawardene attempting a reverse sweep top edged Ashwin to the diving Umesh Yadav at short thirdman. Mahela, who was dropped by Murali Vijay at the same position, went onto score 107 from 112 balls with 9 fours and 2 sixes.

It was a 16th ODI century for Mahela with three of them coming against India. The 36-year-old left the ground with SL in a supreme position of 213 for 1. Skipper Angelo Mathews promoted himself at no.3 to provide an ideal finish for the Lankans with Upul Tharanga, who recorded a career best score of 174* which was also his 13th ODI century.

Toss and Teams: India under a new leader Virat Kohli have won the toss and asked Sri Lanka to bat first at Jamaica. For India, Murali Vijay takes the place of the injured MS Dhoni while Shami Ahmed replaces Bhuvneshwar Kumar. Sri Lanka have also made two changes with Kusal Perera and Sachithra Senanayake replacing Jeevan Mendis and Ajantha Mendis.