Kolkata Knight Riders, who have won the IPL two times, will be missing their talismanic all-rounder Andre Russell. However, captain Gautam Gambhir

Kolkata Knight Riders, who have won the IPL two times, will be missing their talismanic all-rounder Andre Russell. However, captain Gautam Gambhir says his team should look at this s an opportunity in the soon-to-begin season.

Russell has been given a one-year ban for violating anti-doping whereabouts regulations. KKR now England's Chris Woakes as a all-rounder somewhat in the Russell mould.

"There are two ways to look at such situations in life. Either we can see Russell's absence as a challenge or look at it as an opportunity in bold letters. I as an individual, and KKR as a group, are looking it as an opportunity," Gambhir was quoted as saying by PTI in an interview. 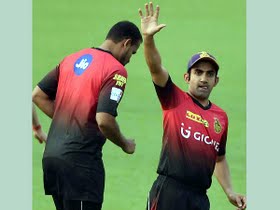 Queried if Woakes is good enough to fill in for Russell as a batsman, Gambhir replied, "Maybe a combination of Manish Pandey's batting and Ankit Rajput's bowling can get us what Russell did. Not only Woakes but the entire team can try to fill-in for Russell and for that you don't necessarily need an all-rounder. May be some other pair can do this."

Gambhir added there was no point pondering on things that is not in their hands. "I better be looking at glass half full," he said. Gambhir reckons that the core Indian group of batsmen like Manish Pandey, Surya Kumar Yadav and Robin Uthappa will have to take more responsibility on a relaid Eden track where pacers will have more advantage.

"From a track that used to favour spinners, it now has good deal of pace and bounce in it. With that as a background, batting has to be top-class. The rival team fast bowlers will come hard at us and we have to be ready for that." Talking about pace on Eden Gardens track, New Zealander Trent Boult's presence would certainly add variety to KKR's bowling season.

"We had left-arm pacemen in Jaydev Unadkat and Pradeep Sangwan in the past and understand the value of this skill that Boult brings in. Boult, Nathan Coulter-Nile, Umesh Yadav, Ankit Rajput and Woakes. We have all bases covered when it comes to fast bowling," he further told PTI.